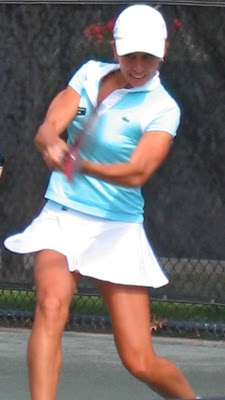 No player on the tour runs more hot and cold than Gisela Dulko. When she's hot (meaning, when she brings her good serve) and playing on clay, she can cause major problems for higher-ranked players. Victoria Azarenka found that out today in Stuttgart, where Dulko, putting a great deal of spin on almost every ball she struck, broke the 2nd seed six times to win their second round match 6-4, 6-3.

Dulko hits the ball much harder than her small frame would indicate, and she knows her way around a clay court. She is another player who, in my opinion, should be ranked higher than she is, but her inconsistency keeps her hovering in the 30s and 40s. She is currently ranked number 34 in the world.

Patty Schnyder, a player who has not been bringing her best serve to her matches lately, did much better in that department today, and played a good match against Sabine Lisicki; however, Lisicki defeated her, 6-4, 6-3.

Meanwhile, Jelena Jankovic pretty much ran over Dominika Cibulkova, breaking her five times, and never giving Cibulkova a break opportunity. Cibulkova's thigh was heavily strapped, and she took a medical time-out during the match, which Jankovic won, 6-1, 6-1.

Both Flavia Pennetta and Daniela Hantuchova repeated their Fed Cup wins over Anna Chakvetadze and Alize Cornet, and repeated them with similar scorelines.

All of the above matches were first round contests except for the Dulko-Azarenka match, which took place in the second round.

The other big upset today was in doubles. 2nd seeds Daniela Hantuchova and Ai Sugiyama were defeated, 4-6, 6-2, 10-7, by Abigail Spears and Sun Tiantian.
Posted by Diane at 5:45 PM