The doctor is in--all the time 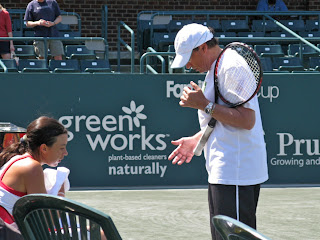 An ESPN commentator calls Walter Bartoli the "mad scientist"of the tour because of the unusual drills he creates for his daughter, Marion. My instinct tells me that at least some of these drills are quite helpful. The problem is that Marion Bartoli must put in so many long hours--sometimes right before a match--executing them. More than once, it has occurred to me that these arduous drills could be related to Bartoli's tendency to get injured several times a year.

Today, at the Family Circle Cup, we watched Bartoli and Vera Zvonareva hit in a very long practice session in the stadium. Zvonareva's coach, Sam Sumyk, stood at the edge of the court and watched. In contrast, Walter Bartoli made copious notes, and constantly walked over to his daughter to give her advice. At one point, during a break, he acted out an entire rally, stepping and stretching and shifting, and talking excitedly the entire time. Marion took off her sock, and I was hoping she would stuff it in his mouth. Bartoli's micro-management of his daughter is way over the top, and was uncomfortable to watch.
Posted by Diane at 6:31 PM

But Marion needs to be boosted. Even her mother agrees with that. So, no problem. It can be difficult to see that. But that's the way it is.

The next time I'm "boosted," I hope I don't look so unspeakably sad.

Sad or tired ? Dad said they are working hard in order to prepare Madrid and Roland Garros.

She looked very dejected to us, and she could not even make eye contact with people. Her frustration was apparent. I know that they work very hard, but I have never before seen a coach who would not permit her or his charge to have even one moment of peace.