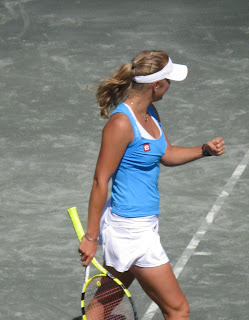 I was so looking forward to the Family Circle Cup quarterfinal match between number 1 seed Elena Dementieva and her opponent, Dominika Cibulkova. The first set began impressively, but then Cibulkova began to lose momentum. At the end of that set, which Dementieva won, 6-4, Cibulkova received treatment for a left adductor strain. Then, after playing only one game in the second set, Cibulkova retired. This was a real disappointment, not only because the match would most likely have been a very good one, but also because it came on top of Vera Zvonareva's retirement last night.

Following the set of tennis played by Dementieva and Cibulkova was the match featuring Caroline Wozniacki and Virginie Razzano, who became a quarterfinalist when Zvonareva was injured. I sometimes wonder why Razzano is not ranked higher than she is, but her performance today kind of answered that question. Razzano--who can be a feisty and clever opponent--was but a shell of her fighting self in this match. She had trouble serving and returning, and had success with an approach shot only once the entire match. Wozniacki defeated her, 6-2, 6-0.
Posted by Diane at 11:41 PM