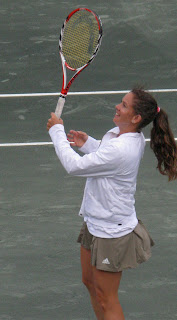 One might even say that the shot of the day took place in this match. Petrova, needing to get a ball coming over the net back to a ballkid, volleyed it across the court with the tip of her visor.

If Patty Schnyder had served against Elena Vesnina the way she served against 3rd seeds Peng Shuai and Yan Zi, she would have had a shot at Sabine Lisicki in the third round. In the first set of Peng's and Yan's doubles semifinal against the unseeded Schnyder and Liga Dekmeijere, Dekmeijere and Schnyder went to a 2-0 lead right away, but were quickly overtaken by the Chinese players, largely because Dekmeijere virtually disapppeared from play in any meaningful way.

But in the second round, Dekmeijere made a significant comeback both in volleying and in playing the rear of the court, while Schnyder served up a storm (as she is always capable of doing), and sent some Schnyder razzle-dazzle over the net--lobbing and spinning and dropping the ball to the delight of the crowd. At one point, she hit a spinning drop volley so close over the net, she looked over her shoulder and down in mock concern--just checking. She and Dekmeijere did what players have to do to win over Peng and Yan (or any of their collective partners)--they kept them away from the net as much as possible.