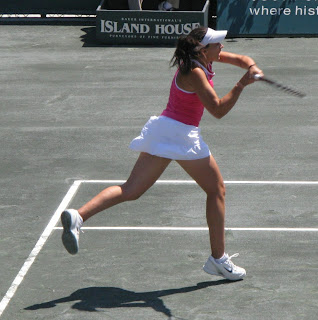 I was eager to see the third round match between 6th seed Marion Bartoli and qualifier Melanie Oudin. Oudin has impressed every time she has played in this tournament. With her mature court sense, clean shot-making and fiery personality, she has demonstrated how to make the transition from top junior to tour player. Today, though, she came up against more than she could handle.

The match began with four breaks of serve. In the fifth game, Baroli missed an easy smash, which sent Oudin to 40-15, and Oudin then achieved the first hold of serve. Oudin's defensive play was excellent; she was hitting spins, lobs and dropshots like a clay court veteran. Because of her smart shot choices, Bartoli didn't hold her serve until the eighth game of the set.

As everyone knows, return of serve is Bartoli's bread and butter, and as fast as she was taking the ball, Oudin was always ready. Finally, though, at 5-4, Bartoli broke. The final rally of the first set was a thriller, with each player getting back balls that looked impossible to retrieve. The set could not have ended more dramatically, as Bartoli saved two break points before winning the last game.

The second set was a different story. For Oudin, errors crept in, doubt crept in, and--most important of all--Bartoli crept in. The Frenchwoman began to settle herself significantly inside the baseline to return Oudin's first serve, something we have seen her do before when her confidence is up. Bartoli's aggression did the trick. At 1-3, Oudin was broken by a netcord ball from Bartoli, which only increased her misery, then Bartoli held at love for 5-1. She went on to win the set, 6-1.

Bartoli fans should take note: Out of the blue today, Marion returned to her former, quite unorthodox, serve. She hasn't used it in a long time, but--for some reason--she felt like using it today.

Bartoli's next opponent will be Melinda Czink, who upset Nadia Petrova.
Posted by Diane at 11:34 PM