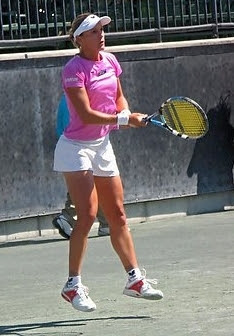 Sybille Bammer lost her round of 16 match to Jelena Jankovic, but gave Jankovic a high-quality match

Marion Bartoli, serving well and finding the corners when she could, was no match against a brilliantly-serving Serena Williams. Bartoli seemed a bit sluggish to me, but her interview reveals that what she felt was more resignation than anything else. Final score: Williams def. Bartoli, 6-3, 6-4

Meanwhile, Ana Ivanovic (selected as U.S. Open "Player of the Day" this week for doing nothing in particular) was totally outclassed by Venus Williams. Unable to break Williams' serve, Ivanovic seemed to fade away, and we didn't get to see much of that wonderful forehand. Final score: Williams def. Ivanovic, 6-4, 6-2

For her part, Justine Henin made short work of a very frustrated Dinara Safina, defeating her 6-0, 6-2.

The most interesting of the four matches was the one between Jelena Jankovic and Sybille Bammer. Bammer has really raised her game of late, and she turned the match into a spirited contest, grabbing a set from Jankovic, and putting on a sometimes-beautiful groundstroke display. Jankovic, for her part, looked tired, and her defense, though good (when is it not?) was not quite a sharp as usual. Jankovic's second serve remains weak. If she has to use it much against Venus Williams in their quarterfinal match, she will pay dearly. Jankovic appears to have overdone it this year, not taking enough breaks, and one wonders whether she can stay both physically and mentally strong enough to keep going. It is frustrating to see such an extremely gifted player on the verge of possible burnout. Final score: Jankovic def. Bammer, 6-4, 4-6, 6-1
Posted by Diane at 11:03 PM