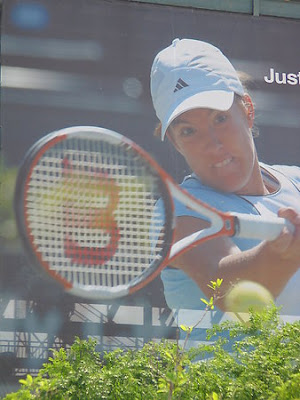 She did it while plowing through two Williams sisters, and she did it without dropping a set. Continuing to play brilliant tennis, as she has throughout the U.S. Open, Justine Henin won the women's title in New York tonight by defeating Svetlana Kuznetsova, 6-1, 6-3. Kuznetsova was obviously anxious in the first set, which seemed to pass her by before she was ready to play it. She elevated her game considerably in the second set, but continued to make errors, and--perhaps more important--made a number of poor strategic decisions. Kuznetsova has a lot more game than she brought to this final, and her failure to apply aggression at key moments cost her a chance to upset the world's number 1 player. I attribute this to nerves, because surely Kuznetsova knows that hanging back is a sure way to go down fast when playing Henin.
Posted by Diane at 9:29 PM