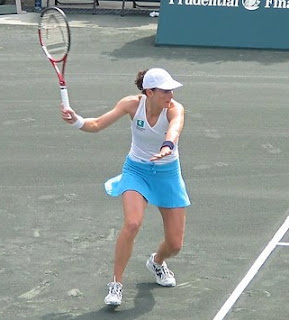 Nathalie Dechy is now the holder of three Grand Slam doubles titles
7th seeded Nathalie Dechy and Dinara Safina, playing together for the first time, defeated number 5 seeds Chan Yung-Jan and Chuang Chia-Jung, 6-4, 6-2 to win the U.S. Open. (Chan, like Maria Sharapova, has apparently given up on getting Americans to learn to pronounce her name and now says "call me Leticia," and Chuang is going by "CJ.") Last year, Dechy won the U.S. Open doubles title, playing with Vera Zvonareva. Their opponents were Katarina Srebotnik and Dinara Safina.

Dechy, with Andy Ram, also won this year's French Open mixed doubles title. She has been ranked as high as number 11 in the world in singles, but has had to deal with a lot of injuries in the last few years, and has seen her singles ranking slip. At the same time, however, she has become one of the tour's stars in doubles. Safina has won six Sony Ericsson WTA Tour doubles titles.

Chan and Chuang were also the finalists at the French Open this year.
Posted by Diane at 10:41 AM