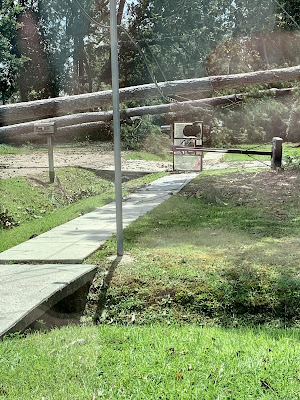 As a rule, I would be blogging regularly during the U.S. Open. As a rule, I wouldn’t be forced out of my house by a hurricane, and I wouldn’t have lost my MacBook Pro adapter. And as a rule, the overnight shipment of a new one wouldn’t have been interrupted by the aftermath of the storm. Who knows when I’ll get it? In the meantime, the women’s draw has also been  a storm of sorts, blowing across Flushing Meadows with high tension and surprises, and knocking down predictions and expectations.

The second round match between 4th seed Karolina Pliskova and Amanda Anisimova was startling in its quality and suspense. It clearly marked the return to form of Anisimova, and served as a reminder that the Tall Cool One (who hit 24 aces) has a lot of game, especially on a hard court. But we’d hardly recovered from that when we were given a thrilling contest between 16th seed (and 2016 champion) Angie Kerber and 2017 champion Sloane Stephens. Kerber, who came back from the missing to contest the semifinals at Wimbledon, prevailed in that third round match, which many observers (not this one) thought was a sure thing for Stephens.

But there was more! Not at all surprisingly, Elena Rybakina took Simona Halep to the edge before losing in an exciting three-setter, Garbine Muguruza overcame Vike Azarenka, and 18-year-old Canadian Leylah Fernandez upset defending champion and 3rd seed Naomi Osaka, also in the third round. In the on-court interview, Fernandez made it clear that the point at which she believed that she could beat Osaka was before the match even started.

With the defending champion out, all eyes were on world number 1, Wimbledon champion Ash Barty. Barty’s third round opponent was a big stage player, Shelby Rogers, who rather easily took the first set off of Barty, 6-2. The world number 1 looked out of sorts, and quite uncharacteristically made a number of unforced errors. But by the second set, Barty pulled herself together, cleaned up the errors, and won the set 6-1.

Seasoned fans know that the third set of this type of match is likely to be a carnival of thrills, and even more likely to end in a tiebreak, and this one fit the description. Both players raised their levels, with Rogers matching Barty slice for slice, and also delivering some stunning lobs. The last few games were “edge of your seat” in intensity, as the momentum swung back and forth. In the end, it was Rogers who walked away with the 6-2, 1-6, 7-6 victory.

Finally, there was the matter of 18-year-old qualifier Emma Raducanu, the Brit who—playing in her first major—advanced to the round of 16 at Wimbledon this year. Raducanu had to retire from that match because of dizziness and respiratory problems. Amd now, here she is, in the second major she’s ever contested, six matches strong and into the round of 16 once again. That’s quite a story, but it isn’t the whole story: In the third round, Raducanu upset the formidible Sara Sorribes Tormo 6-0, 6-1. I saw it and I still don’t quite believe it.

I can’t recall the first week of a major that was this exciting, and I didn’t even get to watch the first couple of days of play because I had no power and no Internet, thanks to Hurricane Ida.