Jabeur, the favorite to win the title, showed just why she was expected to win her first title when, during the first set, she repeatedly frustrated Sharma with hitting her signature drop shot, and by pulling Sharma all over the court. But Sharma has shown this week that she is in it for the long haul:

“I didn’t know really what to do. She was wrong-footing me, she was drop-shotting me, she was making me cover a lot of court, and I couldn’t really read what she was doing....but I just thought, you know, if maybe, maybe I just keep competing, keep showing up, keep doing the right things—those are really inherently quite tricky shots, so like maybe she’ll waver here and there, and like I’ll get an opportunity to get it closer."

Sharma made her move in the second set, and won it 7-5. Then everything changed:

“…by the third set, it was hot, it was humid; I think I was a little bit more energetic than her and my intensity was still the same, so I think that was what eventually gave me the little lead, yeah.”

Sharma's thinking turned out to be accurate. She was patient, and she was relentless. And when she realized that she had a physical advantage, she imposed herself.

After the match, Sharma said that she had used her time this week to employ her physicality in more of an offensive way than she has in the past.

“I think that is the basis of my game….I might not have the straight-up weapons that a player like Ons has, but I do have the speed to kind of close and finish at the net….”

This was Sharma's first win over a top 30 player.

Jabeur said that it was a tough loss, and that “She serves different from the other players, so it was kind of difficult for me to adapt and to return better.”

Of the treatment that she received for her right arm, Jabeur said that she has had long-term shoulder pain, and that she was just hoping to release it a bit so that she could serve better. 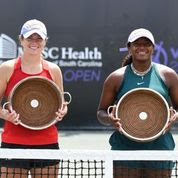