France are the 2019 #FedCup by BNP Paribas champions!

Kiki Mladenovic has a beautiful game. She has a tricky and effective serve, expert volleying skills (she is, after all, an elite doubles player), and a variety of shots that can do a lot of damage to almost any opponent. That's the up side. The down side is the Frenchwoman's well-known inconsistency, which appears to be brought on by nerves. Without a partner by her side, Mladenovic can sometimes crumble.

In this weekend's Fed Cup final, in which Team France played Team Australia, Mladenovic did crumble for a while, and it almost cost her the match. But she pulled herself together and won a tense, highly entertaining contest against world number 1 Ash Barty.

On day 1, France got off to a positive start when Mladenovic defeated Ajla Tomljanovic 6-1, 6-1 in the opening rubber. Not to be outdone, Ash Barty rolled over Caroline Garcia 6-0, 6-0 in the second rubber.

Day 2 was a different story. The third rubber was the aforementioned match that featured Mladenovic and Barty, and it was as thrilling a match as one could hope for. Both players served well, and--here is a rather unusual occurrence--both players displayed exceptionally good second serves. Barty won the first set 6-2, but Mladenovic became very focused in the second set; at the same time, Barty made a lot of unforced errors.

The tension in the crowd (there was a very big--and loud--French contingent) was palpable during the final set, and the players lived up to the implications of that atmosphere. Mladenovic took an early lead but was broken. The opponents broke each twice during the set, providing constant momentum changes. About two-thirds of the way through, Mladenovic had her meltdown, and it looked like Australia was about to take a 2-1 lead. But the mercurial Frenchwoman gathered herself, took advantage of Barty's unforced error production, and the set wound up exactly where it belonged--in a tiebreak.

This time, Mladenovic did not crumble. Rather, she ran away, 7-1, with the tiebreak, and put France ahead 2-1.


🇫🇷 Magnificent Mladenovic! 🇫🇷@KikiMladenovic rallies from a set down to beat Ash Barty and move France within one win of a third #FedCup title

Australia evened the score when Tomljanovic defeated Pauline Parmentier 6-4, 7-5 (I wish Cornet had played that rubber).

The fifth rubber featured something we don't get to see that often in Fed Cup play: All four competitors were elite doubles players. Playing for Australia were former world number 1 and three-time major champion Sam Stosur, and former U.S. Open champion Ash Barty. France was represented by former French Open champion Caroline Garcia and three-time major champion Kiki Mladenovic, Garcia and Mladenovic have frequently played as partners, and won the French Open in 2016.

The French team won the first set 6-4, then went up 2-0 in the second, having won four games in a row. The third game was a close one, but the French team broke and went up 3-0. The Australian team closed the break gap at 2-4. At 2-5, the Australians were almost broken, but they saved two match points. Mladenovic then served for the final, double-faulted on the second point, but--once again--composed herself and successfully served for the championship on France's third match point. 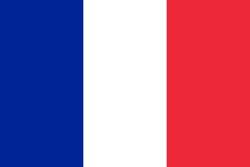 This is the third time that France has won the Fed Cup championship. They defeated The Netherlands in 1997, and the USA in 2003. Captain Amelie Mauresmo brought the team very close in 2016, but France lost that final to the Czech Republic. Now it is new Captain Julien Benneteau who has coached the French team to Fed Cup glory once again. However, it is Kiki Mladenovic's coup du chapeau that will be remembered as the mighty force that brought the Fed Cup trophy back to France.
Posted by Diane at 12:59 PM