Hometown favorite Shelby Rogers upset top seed Madison Keys today at the Volvo Car Open. Rogers defeated Keys 4-6, 6-1, 6-1 to advance to the third round. Her victory occurred not too long after the tournament's 3rd seed, Venus Williams, was upset by Laura Siegemund.

The featured night match was supposed to have been played between Caroline Wozniacki and Annika Beck, but it had to be canceled because of a familiar Charleston-in-April occurrence: 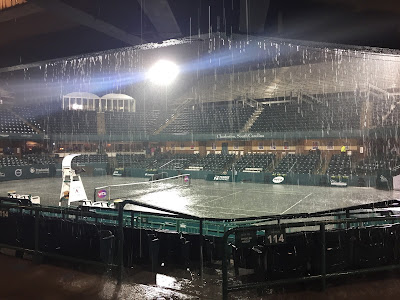 There was a bad thunderstorm and hail, and this, even after Jelena Jankovic was out of the tournament!

Close friends and very successful doubles partners Lucie Safarova and Bethanie Mattek-Sands had to play each other day. Safarova won in straight sets, and will next face Laura Siegemund. Two other very good friends--the Dashas--Daria Gavrilova and Daria Kasatkina, must play each other tomorrow. This morning, Kasatkina defeated Monica Puig 6-0, 6-7, 6-2.

Gavrilova and Kasatkina played their first round of doubles today, too, and lost to 2nd seeds Andrea Hlavackova and Sania Mirza.