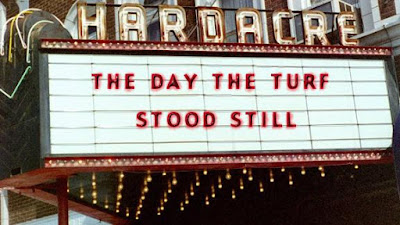 Sitting on my sofa, watching Serena Williams and Heather Watson in today's third round match, I couldn't help but notice that my breathing was rapid, my muscles were taut, and I'm sure my heart rate must have gone up, though I didn't think to check it. Then I thought--how must Serena and Heather feel?

Serena Williams has a knack for getting herself into all kinds of trouble at very big moments, and then--at the last minute, with the locomotive quickly approaching--untying herself from the railroad tracks. Never was this talent more on display than it was today, when British number 1 Heather Watson took a nervous, error-prone Williams to the very edge. And by very edge, I mean that Watson served for the match at 5-4 in the third round.

Williams is currently halfway to what would be her first Grand Slam, and three quarters of the way to a second so-called "Serena Slam." There is pressure. Had this match been played a couple of years ago, it would likely have been routine for the world number 1, but Watson has calmed her nerves considerably in the last year, and she has also greatly improved her serve and become more aggressive. The Brit was highly competitive today, taking advantage of Williams' shakiness, and also throwing in some flair of her own. And of course, the crowd was very enthusiastically on her side during every point.

Williams took the first set 6-2, but then Watson came alive and won the second set 6-4. The third set was not for the weak of heart. It began with Watson's breaking of Williams' serve and then holding her own serve. At 2-0 in the final set, the British star's confidence was high, while Williams continued to double-fault and to have to run to every corner of the court as Watson executed angled volleys and drop shots. At this point in the match, Watson had won six straight games.


A break up at 5-4, Watson served for the match, and then it happened. You know--the part when a screaming, foot-stomping, fist-pumping Serena has had all she can take of this upstart nonsense. She became more aggressive and took more risks--she looked like Serena--but something else happened, as it always does. Playing out the invisible script that has had a trance-like effect on opponents for years, Watson blinked. Two points from an upset of extreme proportions, she couldn't pull it off. Williams broke her, then held, then broke Watson again, though Watson bravely saved two match points.

Watson's performance was elite, yet she lost, and that's what often happens when an opponent tries to stop Serena Williams during a major. A few players (most notably, Garbine Muguruza, who was in some kind of other-world zone when she upset Williams during the 2014 French Open) have survived to take bows, but not many.  Heather Watson has a lot of company. She also has a lot of which to be proud.

In other Wimbledon news, Coco Vandeweghe went crazy on Sam Stosur and beat her 6-2, 6-0. Vandeweghe has done some heavy lifting in this tournament--she's taken out Anna Schmiedlova, Karoina Pliskova and Stosur.

And then there was Venus Williams, whose defeat of Aleksandra Krunic means that she'll play Serena Williams in the round of 16. We were treated to a little psychology discussion on ESPN, the subject of which was how conflicted Venus will be at the prospect of denying her sister both the Grand Slam and the Serena Slam. Venus Williams is a five-time Wimbledon champion--it's hard to imagine that she lets any circumstances mess with her head.

Of course, you could also say: How conflicted is Serena, knowing that she could deny Venus what could conceivably be her last Wimbledon title? Take that and ponder it, ESPN.

Great write up Diane. I sat at my desk in the office watching this match and I can't for the life of me figure out how Serena won a match she had absolutely no business winning. It is like a switch goes off in her head and she just decides that she does not want to lose. kudos to Heather for using the crowd to full effect. Serena said it and I have witnessed it one other time, this general boorish behavviour from a Wimbledon crowd. It happened a few years ago to Venus in her first round match against Vesnina where she was booed because she was late coming to court. Frankly those booing and cheering only served to awaken the winning Serena. She had given up when she lost serve and they brought her back in the match.

I am interested to see how both Venus and Serena play on Monday. It should be truly epic

Yeah, when the Wimbledon crowd starts acting like the French Open crowd, it's a bit much. I also remember them acting like complete asses a few years ago when they were nudged by the British press to put a stop to "ladies making noise." I recall the Venus incident, too.

I was watching the match with my mom, she was quite excited looking at Serena going. When the first set ended i told her we should go feed the dogs, "There is no way Watson can win a single set to Serena..."

That's what so great about professional tennis!