Au revoir, Marion--the tour will never be the same 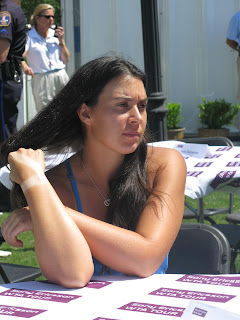 2013 Wimbledon champion Marion Bartoli retired from professional tennis yesterday, citing chronic injury as the reason. "...I can't do it anymore," the Frenchwoman said of having to play through so much physical pain. She made her totally unexpected announcement at a press conference in Cincinnati, where she had just lost her second round match to Simona Halep.

Speaking of her Wimbledon championship, Bartoli said "That was probably the last bit of something that was left inside me."

"I have pain everywhere after 45 minutes or an hour of play," she said. "I've been doing this for so long. And yeah, it's just body-wise, I can't do it anymore."

Bartoli's whole career has been plagued by injury and also by illness. Recently, she has had to contend with multiple foot injuries, as well as an injured hamstring. She said that every part of her body hurt on the courts in Cincinnati.

In a world of tall, slim, braided blonde players, Bartoli--who has dark hair and dark eyes, and whose weight has fluctuated over the years--always stood out. While other players were being judged for screaming on the court, Marion Bartoli was yelling "Bam!" every time she struck the ball. While her peers were in the gym, Bartoli was strapping cables to her wrists and ankles, or letting her father, Walter, attach tennis balls to her arches. So unusual were Walter Bartoli's training methods, he was sometimes called the Mad Scientist of Tennis.

When she was young, Bartoli's father had her play in a court surrounded by a wall. If young Marion backed up too much, she would hit that wall, so she learned to receive serve while standing inside the baseline. As a result, she was generally considered to be the best returner of serve on the tour. Bartoli was different, too, in that she hit two-handed on both sides, employing a slightly longer racquet in order to get more reach. 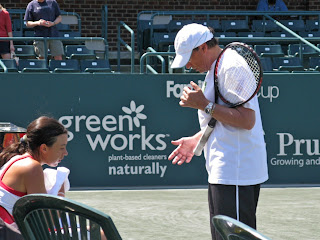 And while the adjective most often associated with Marion Bartoli is "eccentric," the noun most often associated with her is "fighter." Bartoli fought through everything--pain, illness, marathon matches, and a tennis culture that never quite accepted her. She refused to play on the French Fed Cup team because she was not permitted to bring Walter along as her coach. As a result, she was barred from playing in the last Olympic Games, a consequence that stung, but not enough for the Frenchwoman to back down on her demand. (When Amelie Mauresmo became the French Fed Cup captain, one of the first things she did was to end the years-long feud between France and the Bartoli camp.)

Bartoli suffered a major injury at the 2011 Australian Open, and later talked about that experience:

"I couldn't go up and down, and I have a four-level house, only stairs, and I couldn't go down the stairs. So I had to stay in one level and stay there for two weeks laying on the couch, couldn't do anything. And it was during the Australian Open, so every time I was switching on the TV, which was the Australian Open, so I was keeping switching off because I just couldn't look at the matches.

"And I remember I felt so sad, and mentally it was so tough for me that when I had the chance to step back on the court, I didn't want to leave. It makes me so much stronger, and sometimes when I go through some rough patches during the matches, I just keep remember those hard times, and it helps me to just keeping going, keeping going...."

One of Bartoli's ongoing fights was her effort to overcome the pressure of playing in the French Open, a task which had also been very difficult for Mauresmo. Bartoli tended not to do too well in Paris, but in 2011, she decided to embrace the French Crowd instead of being frightened by the pressure. As a result, she reached the semifinals. She then lost to 2010 champion Francesca Schiavone, but she had banished a personal demon. 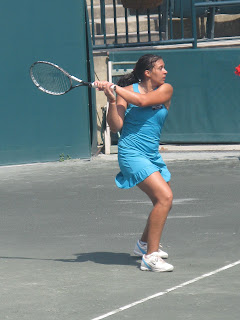 Watching Marion Bartoli play tennis was an experience in itself. Her service motion, which she changed frequently, often involved an excessive number of moving parts, making her look like a French windmill. She was never still. Bartoli jumped up and down, did knee bends and took numerous dramatic shadow swings throughout the course of a match. Her fist-pumping was in a class of intensity all by itself, and her Death Glare is something I would never want directed at me (it was usually directed at her box). She could yell with the best of them, too.

As a match intensified, so, too, would Bartoli. Her 2012 U.S. Open victory over Petra Kvitova reached such operatic proportions that tennis writer Steve Tignor suggested that Bartoli's next opponent retain the services of an exorcist. The only person who was ever able to bring down Bartoli's intensity was Amelie Mauresmo, who accompanied her countrywoman to Wimbledon this year, and taught her how to lighten up a bit.

Though many of us had followed Bartoli's career for years, Marion didn't become a "tennis household" name until 2007, when she reached the final at Wimbledon. There were numerous rain delays at the tournament, and they always seemed to occur in the middle of one of Bartoli's matches. Bartoli would take a nap, and when the rain had stopped, someone would wake her up, and she would go back onto the court and destroy her opponent.

The Frenchwoman reached her post-nap peak when she took out world number 1 Justine Henin in the semifinals. Afterwards, she remarked that, during the match, she had looked up into the stands and seen Pierce Brosnan, and that she knew she had to keep fighting--she couldn't let James Bond down.

This year at Wimbledon, there was more rain, and once again, Bartoli did some power sleeping at the tournament. By the time she reached the All England Club, she had also improved her forward movement, and she had tamed her inconsistent serve, turning it into a reliable weapon. She won the final in straight sets, beating crowd favorite Sabine Lisicki, and thereby attaining the dream she had nurtured since she was six years old. Her Tennis Channel post-match interview is candid and heartfelt. 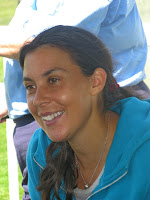 It can't be emphasized enough how different Bartoli is off the court from the crazed warrior persona she presented on the court. Charming and intelligent, Marion really does have a twinkle in her eye most of the time, and her sense of humor is delightful. I'm not sure there is another player on the tour who has consistently exhibited so much candor with the press and the public. It just never seemed to bother Bartoli to talk about her feelings, even if they were very uncomfortable.

To relax, Bartoli paints landscapes. In her recent Cincinnati All Access Hour interview, she revealed that she also has a passion for shoes and apparently owns over a hundred (she wouldn't say how many "over") pairs. She said that she shops only after a victory, but then she turns into a serious shopper.

Bartoli, the former French number 1 player,  is retiring at the age of 28. Her professional career spanned 13 years, and she won eight WTA singles titles and three doubles titles. Her highest ranking was number 7 in the world, which she achieved in January of 2012.

Several years ago, the WTA had a promotional campaign called "Are You Looking For a Hero?" The Marion Bartoli fansite administrators cracked me up when they launched a "Looking For a (Cult) Hero?" page for Marion. It was perfect. "…It's always been a part of my personality to be different, Bartoli said after she won Wimbledon. "Being just like the other ones is kind of boring, I think. I really embrace being a bit different and doing something not everyone is doing."

Marion Bartoli was a strong breath of fresh air on the tour. She gave us drama, she gave us candor, she gave us a fighting spirit to rival any other. I'm really going to miss her. Her "antics" sometimes created controversy, but for me, she always represented a kind of authenticity that has become rare.

It's now time for Marion to relax, paint landscapes and create more opportunities to wear all those shoes in her closet. It will be interesting to see where her life goes now that she has stopped playing professional tennis. Whatever she does, though, she'll do it her own way, and not pay any mind to what others might think about it. And if her tennis career is any indicator of things to come, she'll also have the last laugh; the words "Wimbledon champion" will always appear next to her name.
Posted by Diane at 11:46 AM

Lovely, Diane. I was waiting to read the appreciative words you'd use to send Marion off into the sunset. ;)

Thank you Diane that was a beautiful and fitting tribute to the lovely Marion.

Sure will miss her. The fighter and the likeable colleague. Thanks for the piece Diane.

Thanks, Todd, Sabey and Sunny :)

I already miss her.

You've outdone yourself and all of the other writers. Wow! What a great encomium!!! Thank you, Diane.

I'm so glad you enjoyed it, Doug. Thank you.