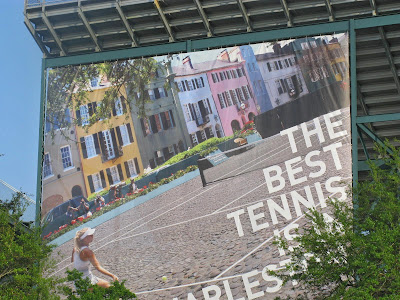 Tickets for the 2012 Family Circle Cup in Charleston go on sale Tuesday, November 15. This year, the tournament's 40th, there will be a Grand Prize VIP Experience for one lucky ticket-holder. The prize includes a behind-the-scenes tour of the clubhouse, media center, stadium, and the ESPN2 production trailers. The winner will also eat lunch in the players' dining room, receive an autographed T-shirt, get a box seat upgrade for a day, and participate in a coin toss. And there's even more: The Grand Prize VIP Expeience also incudes a pre-match photo opportunity with players, valet parking and Terrace Club access.

"Our VIP for a Day contest is the most exciting opportunity we’ve ever offered to our fans, providing unprecedented access to players and areas that are traditionally off-limits to spectators," said Margaret Shaw, Ticket Coordinatorfor the event.

The Family Circle Cup, a WTA premier event, is the only tour tournament played on green clay. Last year, world number 1 Caroline Wozniacki won the Family Circle Cup, and the year before, the tournament once again proved its reputation as an event that launches the careers of major champions: The 2010 Charleston winner was Samantha Stosur, who recently won the U.S. Open. Stosur, in fact, has already committed to compete in the 2012 Family Circle Cup, which will take place March 31-April 8.
Posted by Diane at 10:21 AM

Where else but a tennis tournament can you get sunburn, and then--a few hours later--be in trouble if you didn't bring a jacket and blanket? At least at the FCC, you might get some variety with a tornado!

This is one of my favorite tournaments of the year :)

Is іt ԁiffіcult to set up youг own blog?

I'm not very techincal but I can figure things out pretty fast. I'm thinking
about sеttіng uр my oωn but I'm not sure where to start. Do you have any ideas or suggestions? Many thanks