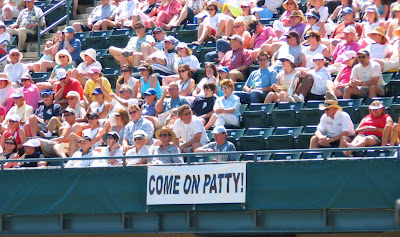 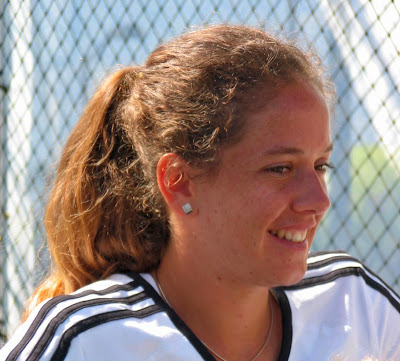 In 2002, Schnyder was unseeded, and had a stunning run, working her way through the draw from hell: number 6 seed Amelie Mauresmo, Mary Pierce, number 3 seed Serena Williams, and number 1 seed and defending champion Jennifer Capriati. She then lost a close final, 7-5, 6-4, to Iva Majoli, who was also unseeded. I imagine that this was the toughest loss of Schnyder's career.

In her 2006 semifinal, Schnyder defeated Justine Henin for the first time in her career, but lost to Nadia Petrova in the final. Last year, a change of weather threw Schnyder off her game, and she lost to Peng Shuai in the second round. She stuck around to play doubles with Corina Morariu, but the fans were clearly disappointed.

Patty Schnyder really shines in Charleston, and her many fans, myself included, can't wait to see her on the green clay again.
Posted by Diane at 11:38 PM

Yes! Who could forget Patty's remarkable run to the Charleston final in 2002, beating Mauresmo, Pierce, Serena, and Capriati in succession. Or her excellent 2004 straight set wins over Dementieva and Davenport, ranked #6 and #4 in the world at the time. Then in 2006 she upsets Henin, the best clay courter of this young century. Perhaps Patty has an "even year" thing going here, in which case 2008 should be exciting indeed :>