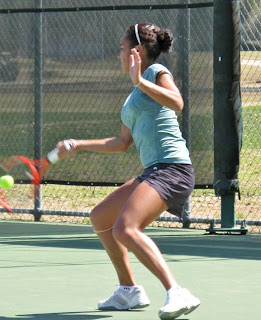 Today in Osaka, Heather Watson became the first British woman in 24 years to win a WTA tournament. Watson defeated Chang Kai-Chen 7-5, 5-7, 7-6 in the final. Neither player was seeded, and neither had ever before advanced beyond the quarterfinals of a tour event. Chang had taken out both top seed Sam Stosur and Watson's countrywoman, Laura Robson, in third set tiebreaks.

The 3-hour and 11-minute match was very close. Chang served for the first set but was broken. Watson held a match point in the second set, but was unable to convert it when she committed one of only two double faults in the match. In the final set, Chang led 5-3 and held four match points.

"She's an amazing returner, so I wanted to go for it," Watson said after the match.

Watson and her partner, Kimiko Date-Krumm, emerged as runners-up for the doubles title. They were defeated 6-1, 6-4 by top seeds Raquel Kops-Jones and Abigail Spears. This is the fourth title of 2012 for the USA team.

Meanwhile, top seed and world number 1 Victoria Azarenka won the title in Linz by defeating 5th seed Julia Goerges 6-3, 6-4 in the final. Azarenka won in Beijing last week, and has won five titles this year, including the Australian Open.

I hope so. Nice to see her and Laura do so well.

Congratulations to Watson, it is a honor to be the first one to accomplish something like that.