Wozniacki twists ankle in Charleston and retires against Zvonareva 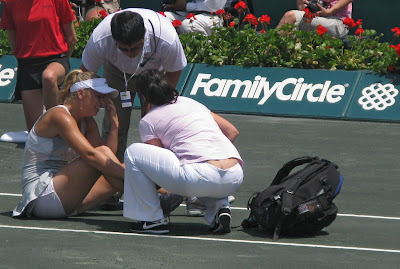 Last year, at the beginning of her third round match in Charleston, Vera Zvonareva fell on the green clay, twisted her ankle, and wound up with two torn ligaments. The injury required surgery, and Zvonareva was out for months. This morning, Zvonareva was on the court again, playing in her semifinal match against 1st seed Caroline Wozniacki. Wozniacki was down 2-4, and when Zvonareva hit her second drop shot of the eighth game, the top seed tried to slide into the ball, but she got stuck. Wozniacki rolled her right ankle and went down, in obvious pain.

The trainer came out, and after a while, Woznaicki returned to the court, but had to retire at 2-5. She said later that she was surprised that she could stand on her leg, "but as soon as I was moving to the sides, it was impossible, so I couldn't play." 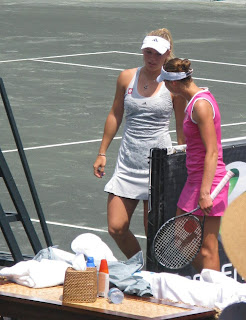 No one knows better than Zvonareva what it felt like for Wozniacki when she went down: "When I saw Caroline twisted her ankle," she said "I was like I have these flashbacks in my mind, and I even feel like I have pain in my ankle right now...." Zvonareva also said that she was available if Wozniacki wanted to talk and get some advice about caring for an injured ankle.

Unlike Zvonareva, who had to leave the stadium on crutches, Wozniacki is able to walk, and thinks that her injury is not serious. She is getting an MRI, and will know more about her condition after she gets the results.

In the meantime, Zvonareva has not dropped a set on the way to the final, in which she will play Sam Stosur, who defeated Daniela Hantuchova 6-3, 7-6.
Posted by Diane at 6:12 PM

The ESPN commentators said that Caroline's body rolled over in the same direction as her ankle which in their opinion might make the injury less problematic as Zvonareva's was. Did you see it close up? What did you think?

I did not see it close up. But she was able to walk, whereas Zvonareva could not. This afternoon, Wozniacki said she didn't think it was too serious.

It was better for her not to walk. And after the mess they made last year of tending to Zvonareva, I'm sure every caution was taken.