Wozniacki defeats Schnyder and advances to quarterfinals in Charleston 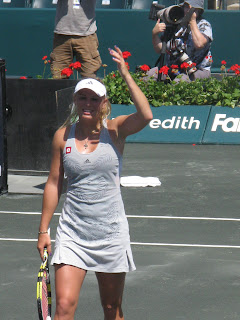 Patty Schnyder had all the right ideas about how to beat Caroline Wozniacki in their 3rd round match in Charleston this morning, but she was unable to execute enough of them. In the first set, Schnyder made too many errors to be competitive, and won only two games. In the second, though, the predominantly Schnyder-cheering crowd saw hope for a long match. After recovering from a break at 1-2, the 16th seed was broken back, then held for 3-4. Wozniacki then went down 0-40, brought the game to deuce, but was broken when Schnyder hit a successful drop shot.

At 4-all, Schnyder saved a break point with an ace, then saved the next break point with an ace. By this time, much of the crowd was cheering Schnyder on loudly, but she was nevertheless broken in that game. When Wozniacki served for the match, the crowd--contrary to custom--was silent. It isn't that fans in Charleston don't appreciate the top seed--they do. It's just that Schnyder is the tournament's most beloved star.

After going down 15-40, Wozniacki made the next two points, but two forehands down the line and a smash later, Schnyder found herself still in the match. She went down 0-40, however, and was broken at 30. Wozniacki then held for a 6-2, 7-5 victory.

Schnyder certainly had her share of opportunities to take the match to a third set, but was unable to do so. Wozniacki, as is her way, kept the ball inside the court and over the net so precisely and consistently that she was able to control the outcome of the match. Schnyder, who was twice a finalist at the tournament, acknowledged the sustained cheers as she left the stadium.
Posted by Diane at 10:52 PM