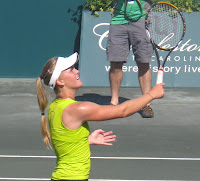 The crowd in Charleston loves Melanie Oudin, and who could--or should--expect otherwise? But last night, that crowd showed its ugly side.

Booing the umpire and linespeople when they made calls that went against Oudin was not exactly mature, but it also is just one of those things that happens when sports fans get excited. However, booing Oudin's opponent, Vera Zvonareva, when she asked the chair umpire to ask  people not to clap during points, is another matter entirely.

Does the crowd really believe that Oudin wants them to clap during points? Both politeness and common sense dictate that the players require as little distraction as possible when they are serving and when they are involved in rallies.

Earlier in the week, Julia Goerges--who happened to be playing American Bethanie Mattek-Sands--questioned a line call on the Althea Gibson Club Court, and--after a bit of discussion--a man in the stands yelled at her "Stop whining and play!" But she wasn't "whining." She was making a case, and in the course of doing so, she was trying to make a living. Pro tennis is a recreational activity for the fans, but for the players, it's a job. They should be allowed to do it without interference from spectators.
Posted by Diane at 8:55 AM

Diane I was listening to that match last night on Radio Tennis and all it did was reinforce the jingoistic behaviour of some American fans. I can only imagine how Vera must have felt during that match. It is one thing to fight your opponent, it is quite another when you have to be fighting the crowd as well. Vera is not one of the more mentally strongest players on Tour and kudos to her for keeping it together and not having one of her famous meltdowns. I am glad to see her in the final and I hope she takes it over Stosur (who I really do not like). It would be fitting since Charleston is where her brilliant 2009 season and it would be fitting if it was kick started right here in Charleston.

As to the crowd, sorry but no amount of crowd support at the regular Tour level will aid Oudin. She needs to be able to hold serve more comfortably than she does now. She also needs to get a backhand. My goodness that thing is worse than mine. I admit that she has guts and mental strength but when things are not going her way she breaks down and that is not good for her going forward.

Sorry to bring up something negative, but if what I witnessed last night on the radio is anything to go by where crowd behaviour is concerned it just reinforces how the Williams family must have felt being constantly booed during a tournament. Must have been very traumatic.

Oudin didn't get off without some fruit thrown at her, either. When she finally got on the board during the second set, a woman yelled "Did you enjoy your nap?!"

LOL - those people are not tennis fans. They sound like a bunch of hooligans. Cannot believe that the Charleston crowd is sounding like this. I was watching the Stosur match online and all you could hear on the changeovers were Australian cheers. There is a match that I love to watch on youtube and it is from Charleston and it is the Sharapova/Serena match from 2008. That match offered so much to the tennis fans and it had both women just playing really wonderful tennis. The crowd was a tennis loving crowd. They were shouting out to both ladies but you did not get the feeling that they were pro or anti anyone. Just supporting both ladies. During this year's AO I was a bit unnerved to see how 90% of the crowd were behind Justine. Whether this was as a result of them missing her or it was a lay over from the USO incident but for me sitting in my living room it was really unnerving to watch that display considering that Serena had always given her best Down Under. I guess what I am trying to say is that I really do not understand tennis crowds. They seem hell bent sometimes on cheering relentless against one player rather than just cheering on good tennis. It was the same feeling I had when Nadal lost at the FO last year. The shouts and screams for Soderling must have been quite unnerving to Nadal, the defending champion at that time. I know when I go to tennis matches while I will cheer for my favourite player I inevitably also cheer more for good shots or I will shout out good shot or brilliant or something but never ever do I cheer relentless for one player against another. I used to play league tennis and I remember when I just started playing in the league everyone there was already known to each other so I had to get my co-workers to come watch me play or my son and his girlfriend. As a player you need that kind of support from the crowd and when you not only play your opponent but the crowd as well that is a lot of pressure for one person to be carrying. Just sayin...

The Charleston crowd is generally quite polite and enthusiastic about both opponents. There were just a few bad moments this year when people got carried away over Oudin. I should add that several people were cheering for Vera.

And it's actually been quite a nice addition to have the Australian cheering section in Charleston.

Maybe the beer was especially tasty that day ;-)

I don't know if the beer is tastier at night, but I think there's more of it....