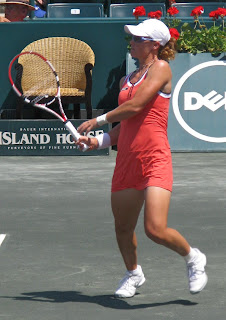 Daniela Hantuchova lost the first set of her semifinal in Charleston today. Her opponent, 4th seed Sam Stosur, out-served her and took the set 6-3. Hantuchova, struggling with her own second serve, was dominated not only by her opponent's serve, but also by her savvy net play. But--just like in the quarterfinals--the 8th seed staged a comeback, finding the lines again with her winning backhand, and taking advantage of Stosur's errors. She played so well, in fact, that she went up 5-2, and it certainly looked as though there would be a third set.

When Stosur served at 2-5, the game went to deuce, but she held. Hantuchova then served for the set, but was broken. Stosur saved two set points on her own serve at 4-5, and finished the game with an ace. Down 5-6 and 0-30, she hit an ace at 112 mph., and then another one, at 117 mph. She then followed the pair of aces with a forehand winner.

Stosur went up a mini-break right away in the tiebreak, and dominated Hantuchova, who won only two points. Stosur's 6-3, 7-6 win put her into the final, where she will meet 2008 finalist and 7th seed Vera Zvonareva. Zvonareva won her semifinal match when her opponent, Caroline Wozniacki, retired because of an ankle injury.
Posted by Diane at 6:37 PM