Snezana Jankovic shows her angry side

Everyone is entitled to a good rant now and then, and Snezana Jankovic had one today, letting loose on Ana Ivanovic, Serbian tennis officals and the Serbian government.


Jelena missed only one match for Serbia in the last ten years. This time she flew 48 hours across half the world to play here, despite a serious wrist injury. At the same time, somebody else had coffee somewhere while my child played hurting for her country.

I think the organization failed this time and marketing flopped....Why were our political elite and tennis officials absent? Those in charge should think: Does anybody care about women's tennis? Do we need a Fed Cup team at all?

I give Jankovic's mother full credit for complaining about the Serbian government and the Serbian tennis officials. There were 18,000 empty seats in a stadium that seats 20,000 people, and the VIP section, generally filled with government officials, was empty. This lack of support for the Serbian Fed Cup team is shameful. 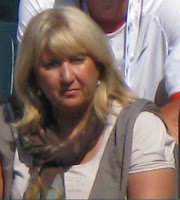 I would have liked the rant much better, however, if Snezana Jankovic had left out the attack on Ivanovic. It just wasn't necessary. And no one forced Jelena to play with a bad wrist; she chose to do so. As a Jankovic fan, I wish she had gone home and rested.

Jankovic went on to say that she "will not let my child play injured again, especially if people who want to see her play cannot get into the empty arena because they cannot afford the tickets." I appreciate the sentiment, but Jelena is not a "child," and such a statement only adds to the sexist attitude so many people have about the tour and its "girls" who need to be protected by their parents and coaches.
Posted by Diane at 9:53 PM