McHale advances to 2nd round of Family Circle Cup

Qualifier Christina McHal--who saved two match points when she was down 2-5--defeated Alla Kudryattseva 3-6, 7-6, 6-3 today in Charleston to advance to the second round of the Family Circle Cup. McHale's next opponent will be 3rd seed Victoria Azarenka. Azarenka sustained a thigh strain last week in Marbella and had to retire in her quarterfinal match.

Michelle Larcher De Brito fought hard to defeat Vesna Manesieva. Manesieva had to receive treatment during the match for what appeared to be some type of illness. Larcher de Brito won the match 6-2, 4-6, 6-3. Vocals aside, Larcher De Brito is a very dynamic player, releasing a lot of energy in every movement. Like some other big hitters, she goes for too much too often. If she can learn to pull back, she should be competitive.

I realized this morning that Anastasia Pavlyuchenkova had withdrawn from the tournament; I was so looking forward to seeing her play. 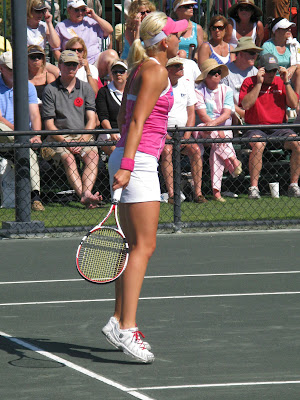 Michaella Krajicek served her team's way to victory in the first round of doubles
In doubles play, last year's finalists--Liga Dekmeijere and Patty Schnyder--lost in the first round to Vania King and Michaella Krajicek. King and Krajicek dominated Dekmeijere and Schnyder throughout, and defeated them 6-2, 6-1 in less than an hour.
Posted by Diane at 7:47 PM