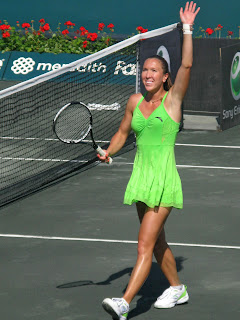 2nd seed Jelena Jankovic--sometimes smiling, sometimes yelling at herself and addressing a very encouraging crowd--lost the first set of her second round Family Circle Cup match against Edina Gallovits. Gallovits likes to play on clay, she gets a lot of balls back (just like you-know-who), and she can throw in some tricky change-ups. Not allowing Jankovic to get a rhythm going, she took the first set 6-2.

The crowd, eager to see Jankovic advance, began cheering her on. For her part, Jankovic became more aggressive, and quickly went 4-1 in the second set. She then faced two break points, and when the second one came along, she made a loud and angry speech. Fans began yelling at her to carry on, and she broke into a big smile. It didn't affect Gallovits, though: She broke Jankovic. Later in the set, Gallovits saved two set points on her own serve, but then Jankovic successfully served for the set. 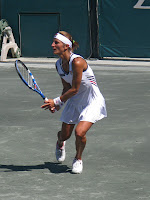 In the third set, the 2nd seed broke at 2-all, then broke again at 3-5. But when she served for the match, she double-faulted twice in a row. On the fourth point, she double-faulted again, and was broken. She broke Gallovits back, however, to post a 2-6, 6-4, 6-3 victory.

Jankovic was quick to praise Gallovits for her competitive clay game. "...she played really well, especially in the first set, and I thought she played well...throughout the whole three sets. She didn't really give me much...."
Posted by Diane at 10:22 PM