"If I'd won it then, I could have lifted the trophy" 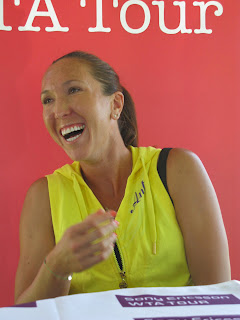 Jelena Jankovic, seeded 2nd at the Family Circle Cup, talked today about how exciting it was to win Indian Wells, and about how heavy the trophy was. Then she recalled the ill-fated fitness training that led her, for a while, to become too bulky. "If I'd won it (Indian Wells) then, I could have lifted the trophy," she said. Jankovic said she had bulked up because she didn't want to be the "weakest" player in the top 10, but that she is satisfied now that she is both fit and moving well on the court.

Jankovic said that winning in California did a lot for her confidence. Also looking confident--and rested--was top seed Caroline Wozniacki, who said she was so tired after the drive from Ponte Vedra Beach last night that she went to sleep without any problem. Wozniacki defended her title in Florida, then drove straight to Charleston.

Sam Stosur isn't playing doubles in Charleston because she wants to save some of her energy for Australia's upcoming Fed Cup contest against Ukraine. Her new partner, Nadia Petrova, therefore had not planned to play doubles, but was asked by Tony Huber if she would pair with Liezel for the Family Circle Cup. Petrova and Huber have never played doubles together before. They are seeded number 1 in Charleston.

Stosur, by the way, sprained her ankle last Thursday, but it is a minor injury.
Posted by Diane at 9:13 PM