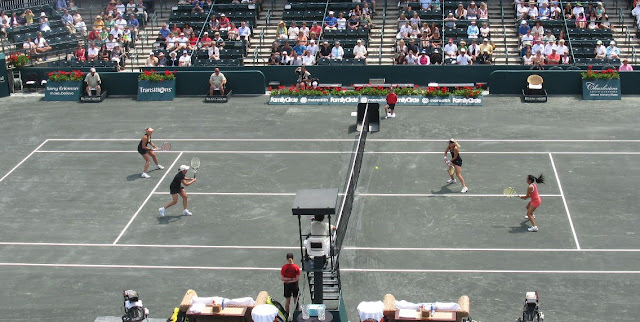 For the second year in a row, Nadia Petrova held a trophy after the championship doubles match in Charleston. Last year, Petrova and Bethanie Mattek-Sands saved three match points and won the championship. Today's match was not thrilling like that one was, but it still a good final. Petrova and Liezel Huber--who had never before played together--defeated Vania King and Michaella Krajicek 6-3, 6-4. 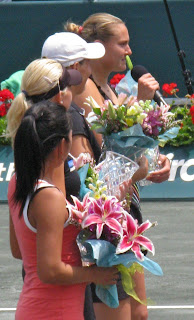 Petrova had not planned to play doubles at the tournament, since her partner, Sam Stosur, decided to play singles only. But Tony Huber, Liezel Huber's coach and husband, asked Petrova if she would be Huber's partner. "How could I say 'no'?" Petrova said, and I'm sure she's glad she didn't.

Since Petrova won the Charleston singles title in 2006, and the doubles title two years running, she was asked what was left for her to do at the Family Circle Cup, and she quickly suggested adding a mixed doubles competition.
Posted by Diane at 3:49 PM

Great action shot, Diane - and thanks for the reports. I love your blogs about Charleston.

bill I was just coming here to post that comment. Beautiful photo Diane. Love how you captured each of the players in a ready position. They are so on their toes right now. Diane, have you had any indication that the Huber/Black partnership might be on the rocks? I noticed in their AO match against the WS that they seemed to not have that connection that they used to have and it is a bit unusual to see one of them partnering with someone else at a premier tournament? In addition, I think Black was aiming for the record at No.1 ranking in doubles but now Huber has surpassed in that. Any thoughts on that or do you know whether any enterprising journalist asked any questions of Huber during her press conference?

There is a rumor going around that Black and Huber are splitting up, but I have heard no support for it. I wasn't at the Huber press conference and didn't see a transcript of it, so I don't know if anyone said anything.

Stosur and Petrova however, have confirmed that they are playing together this year, to the extent that Stosur will play doubles.

Thanks for the response Diane. Hmm, I just got that sense at this year's AO. The body language was very off during that match and Cara seemed quite feisty, more feisty than I have seen her in quite awhile. She was so in your face but at the same time she seemed like the one who was carrying the team. Anyway, I will look for the presser and see if anything was said. And yes those pictures are just beautiful.

Hi Diane, Hope it's all right to ask. I wonder if you have any pictures when the flower girl handed the flower bouquet to Michaella Krajicek. I was trying to take the video tape so I miss that moment. The little girl is my daughter. Thank you in advance.

Oh, Mitt I wasn't able to get that shot--sorry. Does your daughter have long blonde hair? I do have some photos of a little girl with long blonde hair standing near the players--just her back, I'm afraid. But if that's your daughter and you'd like them, please email me with your email address, and I'll send them to you.