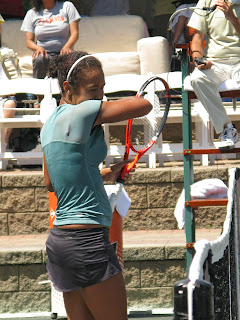 Today, I made a point of watching, in its entirety, the qualifying match between Heather Watson and Zarina Ziyas. Watson won, 7-5, 2-6, 6-1; the twists and turns within the 2-hour and 19-minute match were many and interesting. A word about Diyas: Strong on both sides, she is as aggressive a player as you will see. She took balls out of the air that most players would let bounce, and if Watson even thought about hitting a ball, Diyas was on it. It was a pleasure to see a young player rushing the net so much, and working so hard to take control of points. 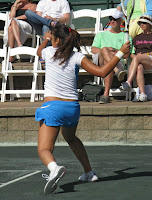 The first set was close, with seven breaks of serve, ending with some good strategic play by Watson. In the second set, Diyas dominated Watson at every turn, repeatedly finding corners in the deuce court. At this point, most of Diyas's errors were "good" errors--a few shots gone wrong as she went for lines and corners. At the beginning of the third set, when she went up a break, it looked as though Diyas's dominance would continue. Watson, however, found her good serve again, and--just as important--she started taking the ball faster. She got a crucial break when Diyas served at 1-2, and the roles reversed. Diyas became more tentative and made more errors.

A funny thing happened during the first set. A ball bounced off of Diyas's racquet and went into the stands. It then bounced off a seat, hit a lower-tiered seat, and bounced back into the court.

Top qualifying seed Chanelle Scheepers had a good win over Eva Hrdinova, whose thigh and knees were bandaged, and who looked a bit tired. 3rd seed Monique Adamczak lost to Anna Tatishvili, but later became a lucky loser. And Christina McHale defeated Galina Voskoboeva in straight sets. (Add Voskoboeva's name to the list of players who hit effective drop shots.)
Posted by Diane at 10:48 PM

Thanks for the report. How would you rate Heather's game?