Day 2 of Fed Cup in Birmingham 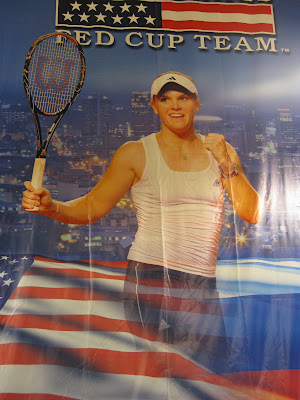 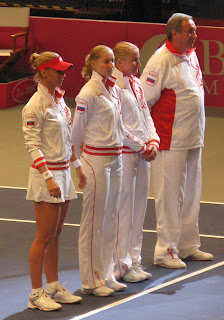 Fed Cup wasn't the only big event in Birmingham this past weekend. The ONB Magic City Art Connection--a juried show featuring art from all over the country--was scheduled for Friday, Saturday and Sunday, but had to be canceled on Saturday because of rain. I spent part of this morning at the show, which was held in Linn Park, and I wish I could have spent more time there. There was some enticing art, as well as plenty of food and music.

Then it was on to the second day of the Fed Cup semifinal. We were entertained by a drummer from a local school, and Ace the American eagle was back, dancing with ballboys and people in the stands, and giving away Fed Cup T-shirts. There were also drawings to win Wilson racquets autographed by Roger Federer and Melanie Oudin. 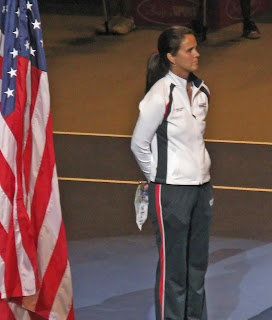 During the second singles rubber, there was at least one exceptionally bad line call that went against the USA, and one about which I wasn't certain. To hear several of the USA fans, though, you'd have thought that every single call against the USA, all day long, was wrong by a yard. Once these fans got started, they didn't stop. All the carrying on led the deejay to break out "(I Can't Get No) Satisfaction."
Posted by Diane at 12:38 AM