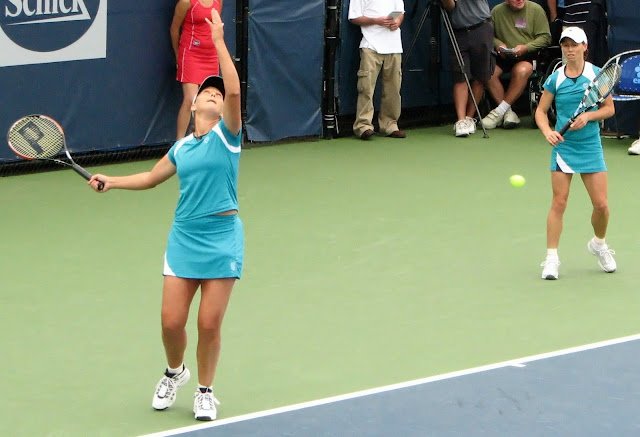 Photo courtesy of After Atalanta
Putting an end to the rumors, Liezel Huber has confirmed that she and partner Cara Black have parted ways as doubles partners. Huber called it a "mutal break" (whatever that is), and said that "We might get back together and we might not."

The team of Black and Huber was no longer dominant last year, with both the teams of Llagostera Vives/Martinez Sanchez and Williams/Williams getting in on the big victories. Huber said that she and Black may still play together in the future, but not exclusively.

Black and Huber have been a team since 2005, though Black played for an extended time with Rennae Stubbs when Huber had to have surgery, followed by a period of recuperation, and Black was not certain that her partner would return to the tour.

Huber says that she will be playing with different partners this season. She will team with Nadia Petrova, with whom she won this year's Family Circle Cup, in Rome. Petrova is now Sam Stosur's regular doubles partner, but Stosur has made it clear that she is going to limit the number of doubles events that she enters. When Stosur does not play doubles in a tournament, Petrova is free to play with Huber, or with whomever she would like.

Black also said that she may play with Melanie Oudin during the U.S. hard court season.

In Stuttgart, Black is playing doubles with Shahar Peer, and Huber is playing with Jelena Jankovic.
Posted by Diane at 6:50 PM