Bartoli retires in 3rd set against Peng in Charleston 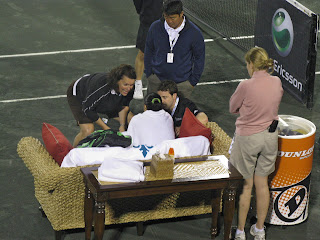 In tonight's feature match in the Family Circle Cup Stadium, 5th seed Marion Bartoli looked into a mirror and saw Peng Shuai. Both play with two hands on both sides, and both like nothing more than to find the angles. Bartoli has more power, Peng has more touch. Bartoli dominated Peng in the first set, which she won 6-2, but Peng came roaring back in the second, and won it in a tiebreak. The two players exchanged breaks in the first half of the third set, then Bartoli called for a trainer.

The trainer checked Bartoli's blood pressure, and she and several officials hovered around her. From my vantage point, it looked as though they were suggesting she retire, but after a while, she rose from her seat and walked to the court to serve. Already suffering from dizziness, Bartoli clutched her abdomen after she served each ball. Peng broke her--though not that easily--and she sat down. Again, the trainer and the offiicials gathered around her, and--after some obviously sympathetic words from the trainer--Bartoli retired.

I'll post any additional information I learn about this incident. It is really unfortunate that the retirement occurred because this was a high quality match, well played by both opponents. It was also a long match, with Bartoli calling for the trainer well after the two-hour mark had passed.
Posted by Diane at 11:02 PM

Thanks for the report Diane. It is good to have an objective writer on site giving us details of what is happening because folks were saying that she was being out played which is the reason for her retiring. Glad to know that that was not the case.

Actually, I thought she was going to win the match. She probably should have retired before she did, so the actual situation was opposite of the attribution.

This will not really have effect, I consider like this.