Victoria Azarenka, the 3rd seed in Charleston, won her first set against Christina McHale this morning in the Family Circle Cup Stadium. However, at 6-2, 2-2, Azarenka retired because of the hamstring injury that caused her to retire in the Marbella quarterfinals last week.

Also retiring was Ayumi Morita, who sustained a left adductor muscle strain while she was playing Daniela Hantuchova. The match ended with Hantuchova leading 6-4, 2-0. And though she finished the match, Bethanie Mattek-Sands began cramping in both thighs in her third set against 9th seed Alona Bondarenko. Bondarenko won, 4-6, 7-5, 7-5.

An enthusiastic Australian crowd was on hand to deliver cries of "Aussie Aussie Aussie, Oi oi oi!" during Sophie Ferguson's match, but their enthusiasm wasn't enough to get Ferguson past Melanie Oudin. The 13th seed won, 6-2, 6-4, and thereby booked a date with countrywoman Christina McHale in the third round. 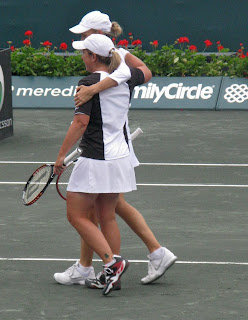 Mattek-Sands recovered from the cramping episode and played her first round doubles match with partner Yan Zi. The third seeds defeated Oudin and Shenay Perry 6-3, 6-4.
Posted by Diane at 9:55 PM