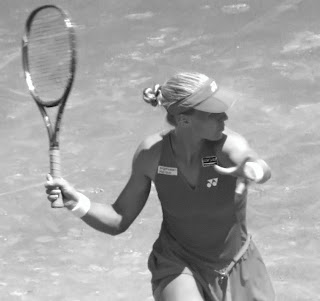 Safarova got off to a roaring start, going up 3-0 in the first set. Dementieva soon caught up, but Safarova continued to use her powerful forehand and precision service game to fend off the top seed's efforts. The set went to a tiebreak, with Safarova getting the first mini-break at 6-4. Dementieva saved a set point, but Safarova was then able to win the set on her own serve.

The second set was a different story. Safarova's level of play went down considerably, and Dementieva launched an attack that left the Czech player with only one game to her credit.

Serving at 2-all in the third set, Safarova had a tense moment when she went from 40-0 to deuce, and even saw a break point against her. Again, she used her service game to squeak out of trouble and advance to 3-2, However, serving at 3-all, Safarova was broken. From then on, Dementieva dictated play, though Safarova saved two championship points on her own serve at 3-5. Dementieva, who was the finalist in 2009, didn't have an easy time of it, closing the match against a determined Safarova, but on her 4th championship point, she did the job.

Dementieva's newly designed trophy was presented to her by 2009 champion Amelie Mauresmo, who defeated her last year in the Open GDF SUEZ final. This is Dementieva's 16th career title.

The doubles final was not played. Iveta Benesova and Barbora Zahlavova Strycova won the championship via a walkover from top seeds Cara Black and Liezel Huber. Black had a viral illness and could not play.
Posted by Diane at 12:18 PM

Well I would have been happy with either person winning. It is good to see Safarova playing better this year. I liked her lefty forehand and some of her serves. Dementieva is an old favorite of mine, so it was good to see her win it. It was her third 3-set match in a row during the tournament. It was also good to see her hitting aces and keeping the double faults way down.