The Russians are coming--and guess who doesn't care? 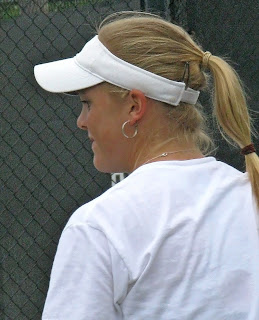 It's a good day when a match lives up to its potential for drama. I wasn't expecting quite as much drama as we got today, though, when 2006 U.S. Open champion and 29th seed Maria Sharapova played Melanie Oudin in the third round of the 2009 Open. No description of this match could do it justice. Both players were hampered by their serves--Sharapova because of her adjustment issues, and Oudin because serving is not yet one of her strengths. At the same time, both played incredible defensive tennis. This combination created 16 service breaks, and what seemed like endless momentum swings.

It was painful to watch Sharapova--once the holder of the one of the best first and second serves ever--double-fault 21 times. Because her serve was so off, Sharapova had to resort to a bigger variety of defensive shots than usual, and she often impressed with those. She took the first set 6-3 with quite a bit of authority, but my instinct proved to be right: Oudin arrived for the second set a different player. Her serve improved, and her confidence slowly built. She went up 5-1 in the second, but Sharapova would deny her an easy set win, and took the score to 4-5. And just when one would be justified to think that the 17-year-old would freeze because of the occasion, she held to take the second set 6-4.

The third set was a roller coaster, and featured five breaks in a row. Halfway through it, Sharapova called for the trainer, something she rarely does. She was treated for an arm issue, and once the treatment was completed, the air had leaked out of the Oudin momentum. It was a very tense moment in the match, with Oudin looking suddenly flat, yet she nevertheless managed to break Sharapova. The breaks continued to occur, and finally, when Oudin served at 6-5, she broke the curse and held serve, finishing the match with a cross-court winner. It took her three hours, but she never stopped fighting.

Oudin, who took Jelena Jankovic out of the third round at Wimbledon, started her U.S. Open run with a resounding defeat over Russian Anastasia Pavlyuchenka, the player who had denied Oudin the number 1 ranking when they were both juniors. She then upset 4th seed Elena Dementieva, considered by many the prime contender to win the championship. Now she has dispensed of Sharapova, but the Russians just won't go away. Oudin's round of 16 match will be played against 13th seed Nadia Petrova. Petrova improved her win record to 7-1 against Zheng Jie today in the third round, defeating her in straight sets.

Nadia Petrova is one of the best servers on the tour, and she is also an expert volleyer. She has what it takes to overcome Oudin and move on to the quarterfinals, especially considering how tired (at least mentally) Oudin may be after playing two huge upset matches. Petrova, however, has a problem with containing herself mentally, and if her belief slips and her temper flares, Oudin could make this another very competitive match.
Posted by Diane at 6:39 PM

I love the shoes and her tennis games as well