Melanie Oudin--gone from Flushing Meadows, but not to be forgotten 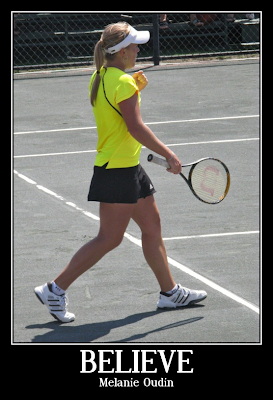 In the U.S., just about anything positive is soon turned into a cliche by the news media. After Melanie Oudin defeated Maria Sharapova, Melanie Mania began, and people who never watch tennis tuned in to see Little Miss Upset. It was indeed a one-of-a-kind sports upset story. Oudin upset Pavlyuchenkova (though that victory went practically unobserved), then the U.S. Open Series winner, then the 2006 champion and media queen, and finally, the estimable Nadia Petrova. All Russians, all highly regarded.

Over and over, we heard about Melanie's pink and yellow shoes, about her twin sister, about how Oudin still lays sod at her tennis club, and about her 16-year-old boyfriend. Eventually, the young star had to have security guards surrounding her at all times. She has signed a contract with BackOffice associates, and will make a couple of major appearances on television talk shows next week.

Throughout the tennis blogosphere and on tennis forums, dozens were quick to point out that it was no big deal to defeat a group of mentally collapsing Russians (whatever happened to: "The top players always find a way to win even if they are not playing well"?), that Oudin "has no weapons," and even that Oudin has no talent.

So we have two camps--those who have made Melanie a national pop craze, and those who have quickly jumped in to tear her down. Business as usual. And though I agree that we cannot really predict what kind of career Oudin will have, you can't put a price on her mental toughness and ability to think positively most of the time. Her forehand and movement are very good, and she has learned to use her slice effectively. Her serve is improving, and I expect we will see more enhancements to her game as she learns what she needs to do to advance.

To me, Melanie Oudin is a breath of fresh air. I followed her junior career, and I saw her play in Charleston. The fight in her is impressive, and her poise on and off the court belies her age and relative inexperience. She is a joy to watch. Her idol is Justine Henin, who--at Melanie's age--was known mostly as a very talented player who tended to choke. Oudin, whose stance on the court and use of positive emotion does frequently remind me of Henin, seems just as driven as her idol. Her coach's attitude even reminds me somewhat of the attitude of Carlos Rodriguez, the man who pushed Henin to improve her serve and come to the net.

What Oudin did at the 2009 U.S. Open will probably always be remembered, as it should be. I wanted her run to continue, but I wasn't really surprised that it ended in the quarterfinals. Oudin's detractors would do well to remember that she also reached the round of 16 at Wimbledon, taking out the 6th seed along the way. And while I was very unhappy to see Jankovic go out, I was impressed by Oudin's attitude. Having watched her in April, though, I wasn't that surprised by her results. She has that little something extra, and it's located in her brain.

So here's to Melanie...Thanks for giving us a string of unrelenting thrills. Know that you gained many fans. Stay strong, and keep doing what you do.
Posted by Diane at 10:26 PM

Plus, she came through in a very pressure-filled Fed Cup match back in February, too. So, really, there has been a full-season build up to get to this point.

Oudin was good. But I also remenber several other tennis players like her, Austin and venus williams. Young, powerful and the ability to believe you can beat anyone that comes your way.