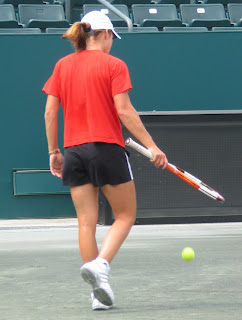 I know now that when a player says she is never coming back to the tour, I can just sit and relax and wait for her comeback announcement. Lindsay Davenport said she couldn't imagine ever returning after she had her first child, but she came back. Kim Clijsters said her body was too battered and in pain to return, but she came back. Justine Henin said she was too burned out to ever return, yet today, 16 months after her retirement, she announced her comeback.

When Clijsters returned, her remarks indicated that the time away from tennis was what enabled her to play again: Her injuries healed, and she learned new ways to train so that she can avoid getting injured so much. Henin is saying something similar--that her mental fatigue has healed, and her desire to play has returned.

Henin is announcing her comeback just a week after Clijsters won the U.S. Open. "Subconsciously, it might have had an impact," Henin said of her countrywoman's success, "but it certainly was not the most important reason."

One cannot help but guess that Henin would like to achieve a career slam, which she would do if she won Wimbledon. Of the three players (excluding Clijsters) who gave Henin the most trouble--Venus Williams, Serena Williams and Amelie Mauresmo--only one would probably now be a viable rival for the pre-retirement Henin. Mauresmo, sadly, is fading away, and Venus's winning record over Henin was achieved a long time ago; they have not played each other in years. As for Clisters, she has a 10-12 record against Henin, which looks good on paper, but Henin won all of the really big matches they played.

Of course, we don't know if we're getting the pre-retirement Henin, or some other version of her, and we also don't know how some of the more successful younger players will handle her game. We do know that there will be plenty of interest in future Clijsters-Henin matches. Henin intends to play in the 2010 Australian Open, which should spice things up considerably.
Posted by Diane at 1:10 PM

Justine and Serena -- I hope they have some great battles in the years to come. Two of my four favorite players (Evonne Goolagong and Virginia Wade - emeritus).

Goolagong and Wade are players I like a lot, too; in fact, Goolagong is one of my favorite players of all time. There will never be anyone else like her.

Diane now that Justine has announced her comeback what do think of the chances of Lindsay being the next? Or will she retire for good?

Lindsay has two small children and is older, so I don't see a comeback. But these days, it's hard to tell, isn't it? But it's interesting that she's never officially retired.