"The honeymoon will end soon" 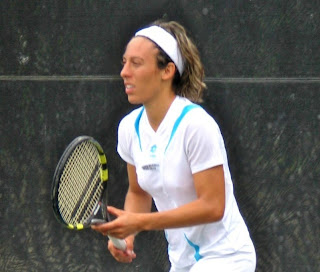 That's because Italians know how to make the honeymoon last.

The "honeymoon will end" comment was made by a commentator who justifiably thought that 26th seed Francesca Schiavone, clearly in pain from a thigh injury, would have a letdown after she won the second set against 8th seed Victoria Azarenka and went up a break in the third. As a matter of fact, the Italian veteran did have a letdown. After missing a chance to break Azarenka and go up 5-1, she netted a put-away smash and almost lost her serve.

Only she didn't. Azarenka found it easier to break her racquet than to break Schiavone. Anyone who has ever watched Schiavone play in Fed Cup knows that she will fight to the bitter end, and today was no exception. She lobbed, she served and volleyed, and she hit the ball with her signature heavy topspin, confounding the number 8 seed. Azarenka, to her credit, hit some beautiful shots, but her backhand went wild over and over, and the errors piled up.