Jamea Jackson to coach at OSU 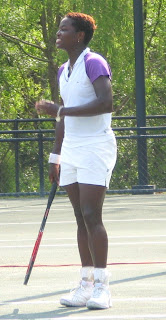 Some people have probably been wondering what happened to Jamea Jackson. She quietly retired, and last week, was hired to be an assistant tennis coach at Oklahoma State University.

Jackson was ranked as high as 45 on the Sony Ericsson WTA Tour, was a member of the U.S. Fed Cup team, and led the team to its 2006 victory over Germany.

Jackson was the first player to use the new challenge system; she challenged a call in her first round match in Miami in 2006. That same year, she defeated Maria Sharapova in the Birmingham semifinals, but lost the final to Vera Zvonareva.

Thanks to On the Baseline for the link.
Posted by Diane at 11:10 AM