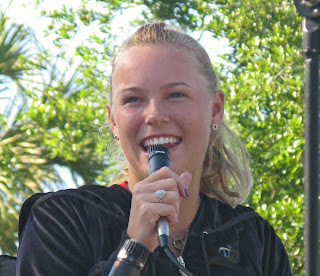 Pilot Pen defending champion Caroline Wozniacki, who defended her title today in New Haven, shook hands with her opponent, then sat down to the strains of "Sweet Caroline" emanating from the loudspeakers. It isn't often these days that a player defends a title, so Wozniacki has a lot to be proud of as she travels to Flushing Meadows for the U.S. Open.

The match was delayed almost three hours because of rainy conditions, and the wind continued to gust throughout play. Elena Vesnina, Wozniacki's opponent--who eliminated Gisela Dulko, Sam Stosur, Anna Chakvetadze, and Amelie Mauresmo from the tournament--did not have a good day. Serving well and playing aggressive tennis, she should have turned the final into a very tight competition. But Vesnina could not stop making unforced errors. Though she hit three times as many winners as Wozniacki, she also also made four times as many errors. At one point, after netting a sure-thing volley, the droll Russian--eyes rolling--applauded herself.

This was Vesnina's second final in a year in which she has dramatically improved everything about her game. She has more work to do in the mental toughness department, but she also has a lot with which she should be very pleased. Wozniacki has also had an excellent season, and goes into the year's last major with a strong record, a more finely tuned game, and a lot of confidence.
Posted by Diane at 4:53 PM