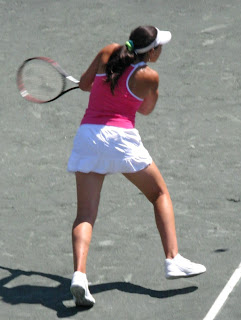 Last night, after her semifinal victory over Samantha Stosur, Marion Bartoli--when asked what she planned for the final against Venus Williams--said her first goal was "to avoid 6-0, 6-1," the scoreline of Williams' semifinal match against Elena Dementieva. No worries. Bartoli played the kind of tennis of which she is capable, but which she does not always create. The 3-hour match was everything a final should be--exciting, exhausting, filled with brilliant shot-making, and filled with some odd detours.

2nd seed Venus Williams, whose first serve is one of the best on the tour, had two problems: She was not getting her first serve in nearly as much as she needed to, and she was playing Bartoli, who really doesn't care how good her opponent's first serve is. To some extent, today's match was a repeat of Bartoli's semifinal match: The 8th seed was content to let her opponent hit a multitude of winners while she went about the business of running down every imaginable shot, over and over, until her opponent made an error. The error-prone Williams was happy to oblige--way too many times.

But Bartoli, who was last year's finalist, had her own problems. After handily winning the first set 6-2, it looked as though she might cruise through the second, but Williams would not let her do that. When Bartoli served for the match at 5-3 in the second, she was visibly a bundle of nerves (ESPN commentators said she had told her coach, during the break, that she was excessively anxious), and was easily broken. Williams brought it to 5-all, held easily, then broke the still-unnerved Bartoli when she served to force a tiebreak.

Perhaps to the surprise of some, Bartoli opened the third round by breaking Williams, and then the final round see-saw was in place, with momentum going back and forth. Williams broke Bartoli to even the score at 3-all, but Bartoli broke again. Once again, it looked as though Bartoli might be able to win the match by breaking Williams when she served at 3-5, but again she was forced to serve for the match. With nerves intact this time around, she used her solid and inventive serve to seal the 6-2, 5-7, 6-4 victory.

From my viewer's standpoint, it appeared that Bartoli could have gone out to celebrate a lot sooner if she had used her down-the-line shot more often. When she did use it, she was successful, but there were several times in this match when she could have used it to win valuable points. The rallies became shorter as the match went on, but in the first two sets, some of them were long and outstanding. Bartoli is an expert returner of serve, and her own serve can be very good, as it was today.

I wish Bartoli would utilize her father, Walter, as a coach only, and hire a trainer who could keep her in shape without over-training her. I have always suspected that some of her injuries and fatigue are direct results of excessive and inappropriate training. Getting the Stanford title, however, should do wonders for her confidence. I hope so. I'm one fan who has waited a long time for a Bartoli victory of this caliber, in a final against someone as formidable as Williams.
Posted by Diane at 5:28 PM

this was a ugly match for Venus. Bartoli won yes, with coaching on and off court by her dad. She then used the bathroom moment after loosing the second set, i call this get Venus out of her grove. But still hats off to Ms. Bartoli, Venus will be waiting for their next go round and i know my Willism sisters, Venus will be ready.

Diane,
Good recap. Thanks.
I watched some of 2 and all of 3. It's great tennis when they're simultaneously executing their respective things of beauty.
Your prescription for MB is easy to like. She apparently anticipates well, and as you have observed, she covers ground. And as many have established, perhaps her strongest suit is how early she hits. Good tennis.