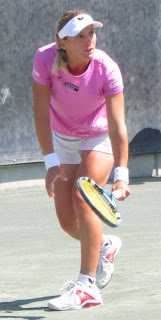 Yesterday, Sybille Bammer took out Zheng Jie out of competition in the first round of the Western & Southern Financial Group Women's Open. To top it off, today, she upset 13th seed Agnieszka Radwanska, 6-0, 7-5. I didn't see any of this coming. Bammer's next challenge will be Serena Williams.

As for Venus Williams, her next challenge will be rival Flavia Pennetta, who defeated Agnes Szavay today. The Woz women had another go at it today, too, with Caroline coming out the winner in three sets. Melinda Czink defeated 11th seed Ana Ivanovic, and Kim Clijsters moved to the third round by defeating Patty Schnyder.

I miss the pairing of Chan and Chuang, and now it looks as though the team of Yan and Zheng has split, also. I don't have any information about the dissolution of these teams, however.
Posted by Diane at 9:25 PM