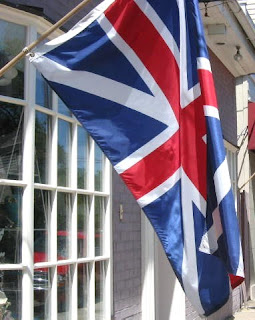 Here are my top 10 Wimbledon occurrences, in ascending order:

10. This clay doesn't look right: Tour veteran and clay specialist Francesca Schiavone surprised everyone by getting to the quarterfinals of Wimbledon. She was then handily defeated by Elena Dementieva, but it was quite an accomplishment nonetheless. On her way to the final eight, she defeated Eastbourne semifinalist Aleksandra Wozniak, Michelle Larcher De Brito, 2007 Wimbledon finalist Marion Bartoli, and Eastbourne finalist Virginie Razzano.

9. Couldn't they have just washed their cars?: Building an expensive retractable roof over Centre Court did the trick--there was hardly a drop of rain during the entire tournament. The one match for which the roof was needed--and then, only briefly--was a women's match, though the roof was kept on (triggering a controversy) for a men's match.

7. Au revoir?: Many of us were struck by the way Amelie Mauresmo paused and soaked in the view and the atmosphere before she left Centre Court, after her defeat by Dinara Safina. The crowd gave her a very enthusiastic farewell. Was she just touched by their affection for her, or was she taking a last look? At any rate, it was a memorable moment.

6. Remember this name: 17-year-old Melanie Oudin was due a breakthrough, and she picked a very big stage upon which to have it. The former junior world number 2 had to qualify to get into the main draw, and once she got there, she did some damage. That damage included defeating Jelena Jankovic in the third round. Oudin lost to Agnieszka Radwanska in the round of 16, but she made a big impression.

5. Service with a smile: The big-serving Sabine Lisicki, who had nothing but misfortune after she won the Family Circle Cup in April, came storming into Wimbledon with her big serve, rapid-fire groundstrokes and skillful drop shots. She took out French Open champion Svetlana Kuznetsova and Eastbourne champion Caroline Wozniacki before falling to Dinara Safina in the quarterfinals. By the time Lisicki reached her fifth round, she was visibly anxious, and she also appeared to have a bit of a fitness problem. One assumes that both of those issues will be addressed, and that Lisicki will continue to improve.

4. One is the loneliest number: World number 1 and top seed Dinara Safina, who has never cared that much for grass courts, nevertheless managed to get to the semifinals. It is easy to forget that accomplishment, however, in light of her dreadful 6-1, 6-0 loss to Venus Williams.

3. Depends on how you define "coverage": NBC executives once again saw to it that those of us who live in the U.S. would see as little live tennis as possible. Forbidding ESPN to show certain prime matches, NBC aired them after the fact, in lieu of matches that were actually in progress. To make matters much worse, U.S. viewers were suddenly--why did it take them so long?-- blocked from using the Wimbledon Live service.

2. This crown looks better with a trenchcoat: Venus Williams holds five Wimbledon titles, including the last two. Her quest to get three in a row, however, was stopped short by her pesky little sister, who took control of the championship match from the opening shot, and never let go. Serena Williams now has three Wimbledon titles, and the rest of us have to get used to looking at photos in which Venus holds the runner-up dish.

1. Instant classic: The semifinal match between Elena Dementieva and Serena Williams--the longest women's semifinal match in Wimbledon history--was a thriller of exceedingly high quality. The only thing wrong with it was that someone had to lose.
Posted by Diane at 12:39 PM

I was rooting for Venus to win her 6th title. The match between Elena and Serena was great, could have went either way. Venus needs to fix her second serve and get a little angry when she's down instead of being passive. Loved the Rodger and Andy match. Both men played great. Good Women's double's final match,Stosur and Stubbs came to play.

I agree that Venus could strengthen her second serve; it would make a difference. That is such a strength of Serena's. Most of the tour's players could benefit from better second serves.

And yes--all three of those other matches were great! I think I may have enjoyed this year's men's final even more than last year's.