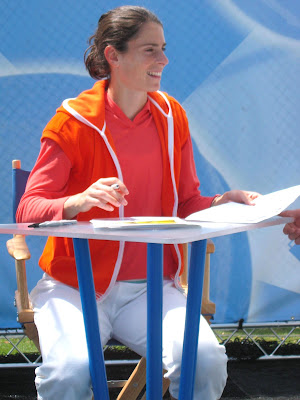 Nathalie Dechy retired from professional tennis today. The 30-year-old French player is pregnant, and is leaving the tour in order to further establish a family. With her goes one of tennis's most elegant games, and I am one fan who will really miss her.

French flair really does exist, and Dechy had it. Sadly, she was also one of the tour's most obvious under-achievers. She has only one singles title to her name, yet it feels like she should have several. Nevertheless, it was always a pleasure to watch Dechy play her understated, clever and lovely game.

Ranked as high as number 11 in the world, Dechy had her share of injuries, and in the last few years of her career, she placed more emphasis on doubles. She did well, too, winning a total of seven titles. Those wins included the 2006 (with Vera Zonvareva) and 2007 (with Dinara Safina) U.S. Open. In addition, Dechy won the 2007 French Open mixed doubles title with Andy Ram. She and Ram were the Australian Open finalists this year. Dechy was also on the French Fed Cup team for ten years, and was twice on the French Olympic team.

Dechy's 2005 Australian Open semifinal experience was an exciting one, yet perhaps our most poignant memory of Dechy concerns her experience at the 2008 Wimbledon tournament. In what was the most dramatic match of the tournament, Dechy played Ana Ivanovic in the second round, as very high winds whirled around them. She put on quite a show of tennis that day, but the show ended in what Virginia Wade called "cruel fate." Dechy held two match points in the second set, and Ivanovic saved one of them when a netcord ball hit from her racquet tumbled ever so slowly over the net. Dechy was already on her way to the net to shake hands when she realized she had not won the match. The Frenchwoman went on to save two match points in the third set, but Ivanovic prevailed, 6-7, 7-6, 10-8.

Dechy left the court to a standing ovation. She said she cried for an entire day. When a reporter asked her if she knew what Ivanovic did when the match was over, Dechy correctly guessed "Kissed the net?" When her guess was confirmed as correct, she replied, "The net deserved it."

Nathalie Dechy is also one of the most charming players with whom I have ever spoken, and I was fortunate to speak with her on a few occasions. There is a natural warmth that emanates from her, and I think that made her a special favorite among fans. Tennis Channel did a mini-documentary on Dechy once, and her personality shone through that, also.

I always hate losing a French player. Emilie Loit retired this year, and now Dechy has retired, too. Though I wish she had won more singles trophies, she did have a long and very good career. I am sure that many others join me in wishing her well. We will miss her.
Posted by Diane at 7:40 PM

Once again, I suspect, this is the only place on the internet to read a touching, heartfelt tribute with regard to women's tennis.

A nicely written tribute, thanks