Jankovic and Kuznetsova both out in 1st round in Eastbourne 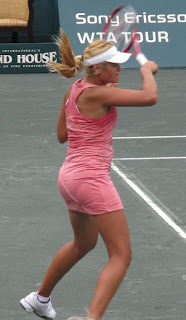 2nd seed Svetlana Kuznetsova won only three games today in her first round AEGON International match against Aleksandra Wozniak. Those three games were all played in the second set. Also going out was 3rd seed Jelena Jankovic, who was defeated by former top 10 player Anna Chakvetadze, 6-7, 6-3, 6-2. This score gives Chakvetadze a career lead of 7-3 over Jankovic, who double-faulted nine times during the match.