Dementieva and Wozniacki upset in Paris 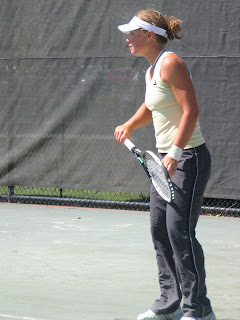 Elena Dementieva was down a set when she played Jelena Dokic in the third round of the French Open, but Dokic had to retire. We'll never know how that match would have otherwise ended, but for Dementieva, the relief was short-lived. The 4th seed lost today in the round of 16 to Samantha Stosur, who defeated her 6-3, 4-6, 6-1. Dementieva, known for her fitness, said in her press conference that she did not feel fit enough to play in Paris, and that she had problems with all the spin that Stosur put on the balls.

Caroline Wozniacki was done in by a shoulder injury, a back injury, and her best friend. The 9th seed entered the tournament with a vulnerable shoulder, and--not surprisingly--she hurt her back during her round of 16 match against her best friend, Sorana Cirstea. Cirstea prevailed, 7-6, 7-5, and those who saw the match said her forehand was impressive.

Winning one of the best match points I think I've ever seen, Virginie Razzano defeated Tathiana Garbin 7-5, 7-5 in a match that was every bit as entertaining as I expected it to be. Both players are to be commended for giving the crowd some big tennis. Razzano was up 5-0 in the first set, in fact, but Garbin made things a lot more interesting at 0-5. Razzano said she thought part of the problem was that she was rattled by a tour employee's asking her to remove her shirt.

Serena Williams, who seems to have some kind of curse on her at major tournaments, had to deal today with an incident which may go down as "the arm," a companion disaster to "the hand" of 2003. Williams hit a backhand very hard to Maria Jose Martinez Sanchez, who was at the net at the time. The ball bounced off of Martinez Sanchez's racquet, but it also appeared to have bounced off of her arm. It is entirely possible that Martinez Sanchez had her racquet raised in protection as much as anything else, but it doesn't matter: If a ball touches your body, you lose the point.

Replay showed that the ball did indeed hit Martinez Sanchez's arm. However, the umpire awarded the point to her, and an angry Williams later accused her opponent of cheating, which the Spanish player called "stupid." Martinez Sanchez maintains she doesn't know if the ball hit her arm, and Williams says she hit the ball so hard that "She knew that ball hit her."

Martinez Sanchez cheated, plain and simple. One top of that, Wozniacki got warned for illegal coaching from her crazy daddy and then she takes a rather dubious injury timeout near the end of her match. Bad day if you like classiness in tennis.

I heard about the injury time-out but not about the illegal coaching warning. This French Open is a dramarama.