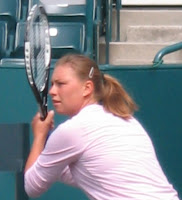 A few days ago, when asked, I said I thought Vera Zvonareva had an edge over Victoria Azarenka should they meet in the semifinals at the BNP Paribas Open. Then I saw Zvonareva play against Caroline Wozniacki, and Azarenka play against Dinara Safina, and I gave the edge to Azarenka.

When Azarenka finally won a final, after mentally wilting in several previous ones, I thought she would become mentally tougher, and she did. But perhaps the occasion got to her today. She had taken out the top seed, she was playing as an about-to-be member of the top 10, and--perhaps most important--she was playing someone she had never defeated.

I think Azarenka will mature and continue to overcome her mental fragility. In the meantime, Zvonareva has become one of the most impressive players on the tour. For those of us who always knew she had it in her, it is a real pleasure to see her become such a threat.

I watched the match on the Fox Sports Network, and was tempted to turn the sound off. The commentators were chronically inaccurate in reporting various items, and the inaccurate commentary was riddled with sexism. The payoff at the end, however, was a nice interview with the charming Zvonareva.

Zvonareva, the 4th seed, will meet either defending champion Ana Ivanovic or Anastasia Pavlyuchenkova in the final. Zvonareva has never played Pavlyuchenkova, and she is 3-4 against Ivanovic overall, and 2-3 against her on hard courts. Last year, Ivanovic defeated Zvonareva in straight sets in the Indian Wells quarterfinals.
Posted by Diane at 4:56 PM

The constant referral to the women (not Azarenka herself, who is still an adolescent) on the tour as "girls" and the referring to the lineswomen as men. It went on the entire match.

Well, some would say that's not sexism but to each his/her own, I guess.

Whoever says it isn't sexism better be referring to men as children, and better sometimes be calling linesmen women.

The secret behind the curtain of the male psyche: women have so much power over the male self-esteem that males have to make themselves feel superior by thinking of womankind as "girls." Males who refer to women as girls are broadcasting not only their lack of respect, but also their insecurity. It's a convenient warning sign that a male isn't mature enough to be taken seriously as a true equal.

Some women call other women "girls," too, because it so acceptable to do so, just as many people say "Oriental" when they mean Asian. And while they mean no harm, culture changes only when language changes. Though it is naive to think that a racial bigot is any less bigoted because the culture has banned words such as "colored"--it is also true that banning such words sends a message that the culture is shifting...if ever so slowly...away from bigotry. And that is an important message.

I don't like the use of the word girls for players on the WTA tour, but in Australia, I'm not sure if it's the case everywhere, in all of the football codes, and various other sports, the male players call their teammates and opponents "boys" and never men.
Just as an example that the other exists as well.

Context is everything, David There are often cases in which women call each other "girls" and men call each other "boys." It's just part of a particular idiom. Your Australian example is a good one. The American "guys and girls" is another one, except that one is obviously a bit less egalitarian.