The latest chapter in the strange career of Jelena Jankovic 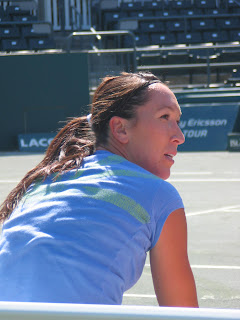 Not that many years ago, Jelena Jankovic was considered a tennis star in the making. Then something went wrong in 2006, and she wound up with a 1-10 match record after playing eleven tournaments. Jankovic considered ending her career at that time, but had a major turnaround in Rome, where she reached the quarterfinals. At the end of that season, she made it to the semifinals of the U.S. Open, but allowed a controversial line call to distract her from her lead against Justine Henin, and lost the match. Nevertheless, the semifinal appearance was a big breakthrough.

The next year, Jankovic won four singles titles and finished third in the world. The best-moving woman on the tour (along with Serena Williams, of course), Jankovic looked poised to do great things--if she could improve her serve and stay healthy. Riddled with injury and illness, Jankovic complained of chronic back problems, serious respiratory problems, foot injuries, and various colds and episodes of flu and viruses.

She had surgery to correct her respiratory ailments, and she did something to improve her back, for we have heard significantly fewer complaints about it. That's the good news. The other good news, or so it seemed, was that--in the spring of 2008--Jankovic finally got a decent first serve, though her second serve continued to be weak. She made it to the finals of the U.S. Open, and gave Serena Williams some very spirited competition.

Healthier body, better serve, experience in a major final...It looked, for all the world, like Jankovic was finally entering the elite group of true tennis greats. Her speed, her uncanny anticipation, her superior court thinking, and her crack backhand down the line made her--for many of us--more fun to watch than just about anyone on the tour. Her wacky personality only added to our enjoyment.

During the off-season, Jankovic did some serious endurance training. Though any player can use more endurance training, I wondered why her coach was making this a priority. The improved serve had already slipped by the end of 2008, and the second serve had never improved at all. When Jankovic returned for the 2009 season, she looked completely different. She was all bulked up the way Henin had bulked up several years before. But the improved serve was--if not gone--still fading away, and even worse, Jankovic's trademark skill--her movement--was compromised. When I saw her play, I was shocked. What I saw was a sluggish, not quite on-beat player who did not at all resemble the Jankovic I loved to watch.

I have no idea what the Jankovic camp was thinking when its members bulked her up and slowed her down. She herself has acknowledged the problem with her movement. Not surprisingly, she says she feels awkward and heavy in her new body, and has lost her footwork. With this loss goes a loss of confidence, as well. As a Jankovic fan, I feel really disappointed, and hope that she make some drastic changes soon. Clay court season is around the corner, and she should be able to triumph on clay courts, but only if she regains her speed and her sharpness.

I think I join many fans in asking: Will the real Jelena Jankovic please come back? But please, JJ--come back with a real serve.
Posted by Diane at 11:23 PM

I hear you. As a JJ fan (JJ was basically the reason why I started watching tennis again, long story), I am baffled and heartbroken by these early round losses. It's hard to see her play like this when you know she can play sooooo much better (even with a poor serve).

I do hope she figures this out because I believe RG is her best chance for a Slam. Please, jj?

This is the same sort of sacrifice so many athletes of today make. The bottom line is that when an athlete bulks up, he or she is risking a loss of mobility, agility, and fundamental skill. I hate to see this happen. Trainers of pro athletes should know better than to only focus on one aspect of an athlete's game.