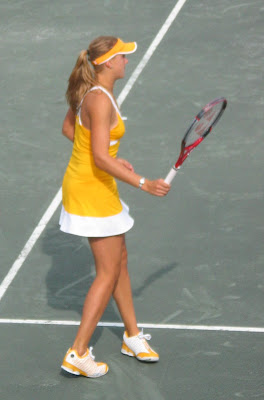 Nicole Vaidisova--yesterday's phenom, today's world number 80--has always been a head case. Of course, she has a lot of company in that department, as far as the Sony Ericsson WTA Tour goes. But it is past the time that her age can be used as the reason for her mental lapses and temper tantrums. Vaidisova, who showed great promise at age 15, did not turn out to be Chris Evert or Martina Hingis. Rather, she turned out to be streaky, temperamental, and given to meltdowns at important moments.

The 19-year-old Czech player split with coach David Felgate earlier this year, will not play in challenger tournaments, according to a Globe and Mail feature by Tom Tebbutt. Tebbutt reports that a source close to Vaidisova says of her: "She basically cannot compete. And there's a difference between that and trying. The minute things go wrong, she can't handle it. There's a complete irrationality about her when that starts to happen on court."

This is an important year for Vaidisova--the year that she either gets it together or disappears from the top 100.
Posted by Diane at 5:34 PM