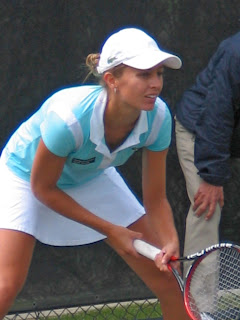 Always a formidable opponent, Gisela Dulko upset number 3 seed Jelena Jankovic in Miami tonight, 6-4, 7-5. There were nine breaks of serve, and for the first two-thirds of the match, Dulko's second serve wins in both directions marked the only real difference between the players, statistics-wise (I was not able to see the match). Dulko has a solid game and is a hard hitter, but she has a very inconsistent serve, which keeps her from pulling off more upsets.

Qualifier Michaella Krajicek took Nadia Petrova to three sets, but lost to her. And Kaia Kanepi performed a comeback just in the nick of time, to defeat Maria Jose Martinez Sanchez, 4-6, 6-4, 7-5, in what looked--from the scoreboard--to be the thriller of the day.
Posted by Diane at 11:31 PM