Pennetta to team with Schiavone at Indian Wells 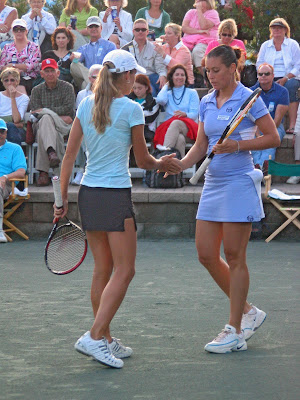 Flavia Pennetta (right) with former doubles partner, Gisela Dulko
In her Vina del Mar blog, Flavia Pennetta says that she will team with Francesca Schiavone to play doubles at Indian Wells this year. Pennetta mentioned this as part of the answer to a question about whether she intends to play more doubles with Elena Dementieva. Pennetta and Dementieva teamed up at the very last minute in Los Angeles a couple of years ago and won the tournament, then were finalists at the U.S. Open. Dementieva is now focusing on singles only, however.

Pennetta played doubles with her friend Gisela Dulko for a while; I do not know why that team decided to split. She indicates in her blog that she hopes to team with Schiavone for the Olympics.
Posted by Diane at 10:34 AM