Rogers Cup: All fall down 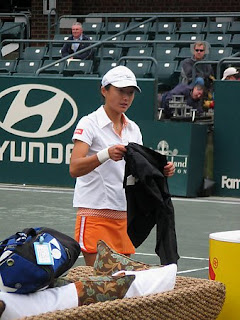 Maria Kirilenko, whose promising career went seriously south and has seen a recent upswing, injured her left knee today in her match against Marion Bartoli, and had to retire.

Ana Chakvetadze, who has been sick for a few weeks, probably should not have entered the Rogers Cup; in fact, it was my understanding that she had withdrawn. She retired during her match against Virginie Razzano.

Elena Dementieva said goodbye today, when she was defeated by Francesca Schiavone, 6-7, 7-3, 6-2. Schiavone's sagging career has also been on the rise again. And Meghann Shaughnessy, whose once excellent career took a serious slide and is looking a bit brighter these days, took out Lucie Safarova, 3-6, 6-4, 7-5.

But the biggest fall of all was that of defending champion (and new East West Bank Classic champion) Ana Ivanovic, who made her exit in the second round. She was defeated, 6-3, 6-1, by qualifier and doubles specialist Yan Zi, who has qualified for a number of tournaments in a row recently. A legitimate argument can be made that Ivanovic was too tired after her run to the Los Angeles title, especially after the semifinal grinder between her and Jelena Jankovic. An argument can also be made that Ivanovic, despite her immense talent, still isn't very consistent. And of course, both of these arguments may be relevant.
Posted by Diane at 7:11 PM